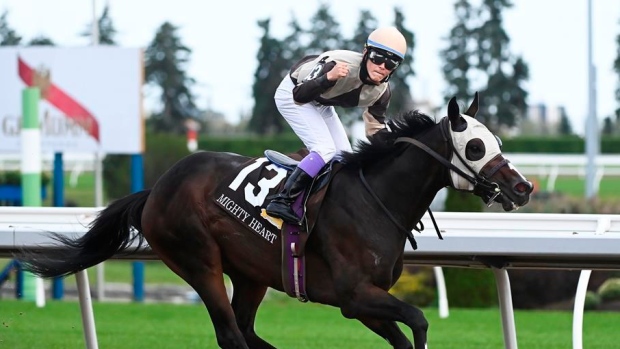 FORT ERIE, Ont. — It's two down, one more to go for jockey Daisuke Fukumoto and Mighty Heart.

Mighty Heart passed Clayton in deep stretch to capture the $400,000 Prince of Wales Stakes on Tuesday. It came 17 days after the one-eyed Mighty Heart went wire-to-wire as a 13/1 longshot to win the $1-million Queen's Plate at Woodbine Racetrack.

Mighty Heart, who lost an eye in a paddock accident with his mother as a foal, can become the first horse since Wando in '03 to capture the OLG Canadian Triple Crown with a win in the Breeders' Stakes. The 1 1/2-mile turf race is scheduled to be run Oct. 24 at Woodbine Racetrack.

Mighty Heart, the 6/5 favourite, stood third coming off the final turn behind Clayton and Dotted Line. But Fukumoto moved his mount into second then was able to reel in — and pass — Clayton and jockey Rafael Hernandez seemingly with ease to win the 1 3/16-mile dirt race in 1:55.2 before no spectators at Fort Erie Racetrack.

"A lot of people expect him and I expect him to," Fukumoto said. "He did it today, I'm so happy."

Clayton, the 3/1 second choice, was second in the nine-horse field with Dotted Line third.

Hall of Fame trainer Josie Carroll claimed her second Prince of Wales Stakes victory — she won in 2016 with Amis Gizmo. And while Mighty Heart has the pedigree to run on grass and is a win short of the Triple Crown, Carroll said a decision will be made later regarding the bay colt's status for the Breeders' Stakes.

"As always, I always say we wait and see how the horse comes out," she said. "That's the key.

"This is a nice horse, I think he'll take to the grass. Certainly he's bred to so fingers crossed."

The win was Mighty Heart's third in four races. Overall, he has three victories and a third-place finish in six career starts, all coming this year, for $688,003 in earnings.

Mighty Heart was also a winner in just his second career appearance on dirt. He was fourth earlier this winter at The Fairgrounds in New Orleans.

"This is just a wonderful little horse," said Carroll, who was inducted into the Canadian Horse racing Hall of Fame in 2019. "He gets better every time."

"So many people have fallen in love with this horse from the start of the Triple Crown," he said. "It makes my heart feel so good that so many people are excited.

"I never dreamed that he'd do what he's done but we always had faith in him, Josie in particular. She was right there saying to me, 'This is a horse. This is a race horse, Larry. We just have to figure out the problem.'"

Mighty Heart served notice in the Plate, going wire-to-wire for a dominant 7 1/2-length victory Sept. 12 before no spectators at Woodbine Racetrack, earning Carroll a third Plate win. Mighty Heart's time of 2:01.98 was the second-fastest since 1957 when the race was first run at the new Woodbine over its current 1 1/4-mile distance.

But instead of having to race on different surfaces just 17 days apart, Mighty Heart will now get 25 days to prepare for the Breeders' Stakes. That's the same time that existed last year between the Prince of Wales and Breeders'.

The 17-day gap between the opening two legs came the result of all three Triple Crown races having to be rescheduled due to the novel coronavirus outbreak.

This report by The Canadian Press was first published Sept. 29, 2020.