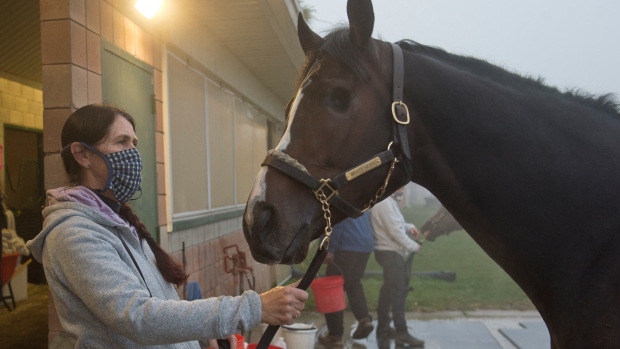 TORONTO — He's chasing Canada's first Triple Crown in 17 years, but it hasn't exactly been a meteoric rise for Mighty Heart.

The colt lost his left eye in a paddock accident as a foal and didn't race as a two-year-old. And a lacklustre start this winter — fourth and 10th-place finishes at Fair Grounds in New Orleans — prompted concern from owner-breeder Lawrence Cordes.

"He did ask me at that time, 'Do I have a horse worth going on with or is this (loss of eye) going to handicap him in any way?" Carroll said earlier this week. "Yes, at that time I did say, 'Larry, this is a good horse, he just needs some time and needs to figure it out.'"

Since then, Mighty Heart has won three-of-four races (finishing third in the other), including the $1-million Queen's Plate and $400,000 Prince of Wales Stakes. A victory Saturday in the $400,000 Breeders' Stakes — a 1 1/2-mile turf event at Woodbine Racetrack — would make Mighty Heart just the eighth winner of the OLG Canadian Triple Crown since the series began in 1959 and first since Wando in 2003.

Mighty Heart is the early even-money favourite for the Breeders' and will break from the No. 8 post in the 12-horse field.

"Obviously I was somewhat disappointed but there was a shining light there," Cordes said of Mighty Heart's first two events. "In his first race he violently threw his head coming out of the gate and lost probably three or four lengths.

That talent was on full display Sept. 12 when Mighty Heart went wire-to-wire for an emphatic 7 1/2-length Plate victory at 13/1 odds. Seventeen days later, he came from third on the final turn to win the Prince of Wales as the 6/5 favourite.

"If you're looking for a horse that's going to compete at the higher levels, you generally want one that's got everything right and with one eye that was a great handicap right from the start," Cordes said. "Of course I was seriously worried but again what I looked at was the breeding I put into this horse and thought, 'Damn, we'll give it a shot, anything can happen.'

"That's one of my sayings, 'Anything can happen.'"

Fortunately, Cordes is patient by nature, something that's served him well in the electrical machinery business.

"I've had to be patient," he said. "I've been in another business for 52 years and it took a long time to develop that business and put it on a good track.

"In the horse-racing business, I kind of followed that path . . . it's all worked out."

Still, Mighty Heart came into the Plate well under the radar. To many he was an unknown, the last of Carroll’s three entries behind heralded filly Curlin’s Voyage and Belichick, who eventually finished behind Mighty Heart and will also run Saturday.

"I think these good horses have something intangible," Carroll said of Mighty Heart. "This horse had that demeanour.

"He had talent but he matured. Every time he ran he got better and I thought going into the Plate this horse was so much on the improve he deserves his shot."

The same could apply with the decision to have Daisuke Fukumoto ride Mighty Heart. Fukumoto, 23, is in just his fourth season at Woodbine.

"I guess he's kind of like this horse, the young guy that's getting better," Carroll said. "I will say he listens to instructions, which I think is really important.

"But when he has to call an audible, despite his inexperience he seems to be making the right calls."

"In the race he broke sharp and looked like he wanted to go in front," Fukumoto said. "He was very strong with me.

"The trainer told me not to go in front but I just sent him. My horse was a longshot anyways."

Fukumoto said the first time he rode Mighty Heart he didn't realize the horse had only one eye. However he admits he was a little concerned about it in the Plate.

"I didn't know he only had one eye, I was a little surprised," Fukumoto said. "I was worried because I'd never run in the Queen's Plate and it was going to be a tough race."

But Fukumoto says Mighty Heart has changed his career.

"Oh yeah, he has changed it a lot," Fukumoto said. "When I won the Queen's Plate, in Japan many people texted me and many media also.

A victory Saturday would move Fukumoto into select company.

"I never thought about winning three," he said. "I win two (Triple Crown races) and so I'm already happy.

Carroll can become the first female to train a Canadian Triple Crown champion and just the fifth overall since '59.

"It's pretty exciting, but what's exciting is this horse has a shot to do it," she said. "We often go in these races but this horse has shown himself to be a serious contender.

"He's going to be close to the pace, that's what he wants to do But as he proved he doesn't have to be on the lead. As long as he's in contention, this horse will be fine."

This report by The Canadian Press was first published Oct. 22, 2020.