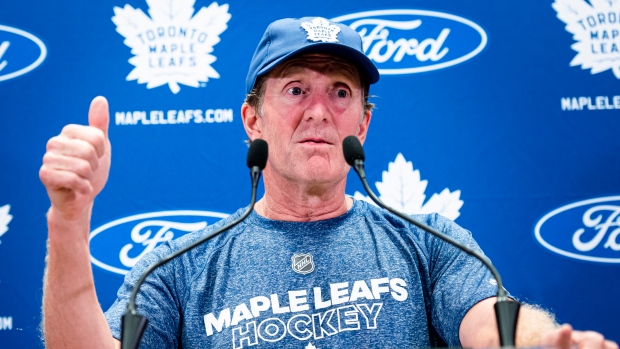 Now that Mitch Marner has signed, the big question with the Toronto Maple Leafs is the captaincy. Not just who they pick, but when.

Head coach Mike Babcock was asked Wednesday if the Leafs will name a captain sooner rather than later. As expected, the head coach didn’t give much away.

“When does the season start?” Babcock asked in response to a reporter’s question.

“Is that later or sooner?” Babcock came back with.

“See you guys then,” Babcock replied with a smile while pretending to walk away.

Babcock said last week that the team will announce the decision “here coming up and end the speculation,” but hasn’t given away much else. TSN’s Mark Masters noted last week that Auston Matthews, John Tavares and Morgan Rielly are among the top candidates.

“Well I think Mitch is one of those guys with his enthusiasm, with his energy and the way he plays, he’s leading anyway, but as he grows into a man and Mitch has been around winning before. He knows how to do things right. That’s leadership. And then [Matthews] is a different guy, he’s playing in the middle but he’s really evolved. I think the biggest thing with Matty is how comfortable he is now compared to with what he used to be with all this. With the guys. He was always comfortable on the ice but it’s bigger than that when you’re leading, and so I think that’s been the biggest thing is sharing himself. That’s what leaders do. They do their job, they do it good enough that they’ve got time to help you as well and that’s what those guys are able to do,” Babcock said Wednesday.

“I think we’ve got a lot of leaders in that room,” Marner told reporters on Wednesday.

“I think, regardless if someone has a letter or doesn’t have a letter on their chest, there’s a lot of guys in there that could wear one and there’s a lot of guys that will still lead by example every day and that’s what we need. We need everyone on this team to be a leader. When something needs to be said, no one’s got to be shy about it. We’ve just got to speak up and make sure everyone listens.”

The Ottawa Senators took down the Leafs 3-1 in their preseason opener Tuesday night in St. John’s, N.L.