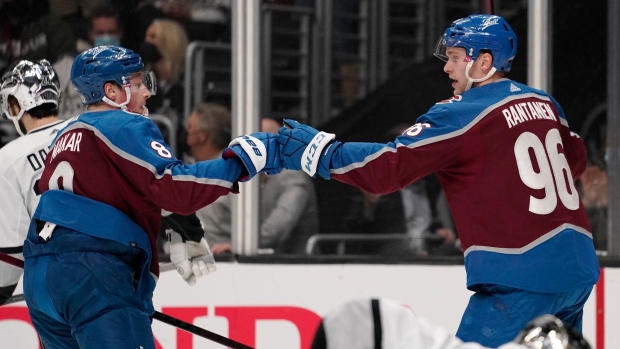 LOS ANGELES (AP) — Kiefer Sherwood scored his first goal in nearly three years, Mikko Rantanen had a power-play goal and the Colorado Avalanche stayed hot with a 4-1 win over the Los Angeles Kings on Thursday night.

Nicolas Aube-Kubel and Devon Toews also scored for the Avalanche, who have won five straight and are 10-0-1 in their past 11. Darcy Kuemper made 40 saves as Colorado won the second game of a back-to-back after defeating Anaheim 2-0 on Wednesday.

Anze Kopitar had a power-play goal and Jonathan Quick made 23 saves for the Kings, who have lost three straight.

Los Angeles will play 10 of its next 11 on the road, returning home Feb. 15 against Edmonton in a game that was postponed from December because of concerns about cross-border travel.

Sherwood made it 2-0 at 3:06 of the second period, whipping around for a wrist shot on a loose puck in the right circle to score his first goal of the season. He had not scored since March 26, 2019, when Sherwood was a rookie with the Ducks — going 38 games over the past four seasons without finding the back of the net.

Kopitar got the Kings back within a goal at 2-1 on the power play at 8:58, coolly scoring into an open net after Kuemper took himself out of the play trying to cut off the angle for Alex Iafallo. Of Kopitar’s team-leading 36 points this season, 12 have come on the power play, where he has four goals and eight assists.

Aube-Kubel left the penalty box at the right time, collecting Logan O’Connor’s stretch pass to score on a breakaway and restore a two-goal lead at 4:11 off the third.

Toews got an empty-netter with 1:35 remaining.

After having his three-game scoring streak end in the 2-0 win at Anaheim on Wednesday, Rantanen got back to it midway through the first period, tipping in Nathan MacKinnon’s shot on the power play for the 1-0 lead. Rantanen has five goals and two assists in his past five games.

The penalty kill for Los Angeles allowed a goal for the fourth straight game. Drew Doughty had a chance to clear the puck, but his weak effort was kept in the zone, preventing the Kings from making a line change. That group was eventually worn down by Colorado’s dangerous first power-play unit.

Kings C Quinton Byfield, the No. 2 pick in the 2020 draft, made his season debut. Byfield was set to make the team coming out of training camp before breaking his ankle in a preseason game on Oct. 5, and his return was further delayed after testing positive for COVID-19 in late December.

NOTES: Colorado is 15-1-1 in its past 17 games. ... Rantanen also had an assist, giving him five goals and three assists in his past five games. ... Avalanche D Tyson Jost played in his 300th career game. ... Kings D Mikey Anderson played in his 100th game.