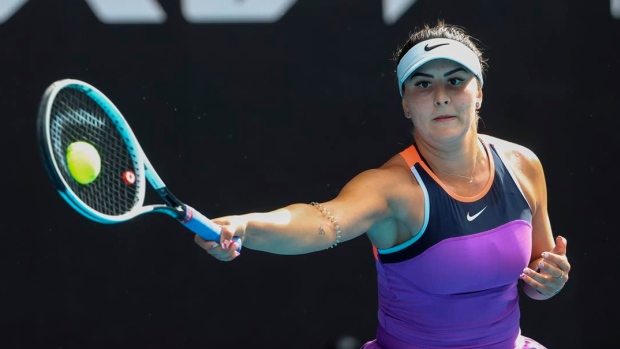 Round 2 of the Australian Open begins Tuesday night with five Canadians looking to punch their tickets to the round of 32.

On the men’s side of the draw, Milos Raonic, Denis Shapovalov and Felix Auger-Aliassime all look to build off of their strong opening-round performances.

Meanwhile, Bianca Andreescu and Rebecca Marino both picked up wins on Sunday, in the first Grand Slam event of the season.

However, if you didn't know any better you would think Andreescu was in mid-season form. The Canadian picked up right where she left off in 2019, with three aces with zero double faults in the service game.

She also forced nine break points, converting on three of them, and was broken just once in the match while saving three other opportunities.

Andreescu’s newest challenger - Hsieh Su-wei - enters on the heels of a straight-sets win in the first round.

The No. 1-ranked doubles player in the world won five break points in her opening-round match and won eight of her 10 service games.

Andreescu and Su-wei have met once before, with the Canadian winning in straight sets at Auckland in 2019.

While Andreescu looks to maintain her opening-round pace, fellow Canadian Marino will attempt to do the same.

Marino, 30, is playing in her first Grand Slam tournament in eight years.

The Canadian needed to sneak her way into the main draw of this Grand Slam by winning three qualifying matches.

She took the momentum of qualifying for the event right into her opening match, winning the first seven games on the way to a 6-0, 7-6 victory.

Marino served the ball incredibly well on Monday, winning 89 per cent of her first-serve points, and didn’t face a single break point opportunity.

Marino faces a tougher test on Wednesday as she takes on World No. 20, Markéta Vondroušová.

Vondroušová stumbled out of the gate in Round 1 and dropped the first set. But the native of Czech Republic would win the next two sets, advancing with the score of 2-6, 7-5, 7-5.

On the men’s side of the draw, we have three Canadians looking to make a deep run.

Raonic and Auger-Aliassime both cruised through their opening-round matchups, winning in straight-sets.

Raonic has reached the quarter-finals at this event in three of the last four seasons.

Auger-Aliassime is set to take on James Duckworth, who also won in straight-sets in Round 1.

The young Canadian was stellar in his opening-round match, winning 12 of his 13 service games, and breaking serve six times.

The Round 1 win for Auger-Aliassime was a big one, as it was his first ever in the main draw at the Australian Open.

Rounding out the day for Canada will be Denis Shapovalov.

The 21-year-old had to scratch and claw for his opening-round win over Italian Jannik Sinner.

Shapovalov needed five sets to advance past the first round at the Australian Open for the first time since 2019.

The Canadian has never faced Tomic in an ATP event.