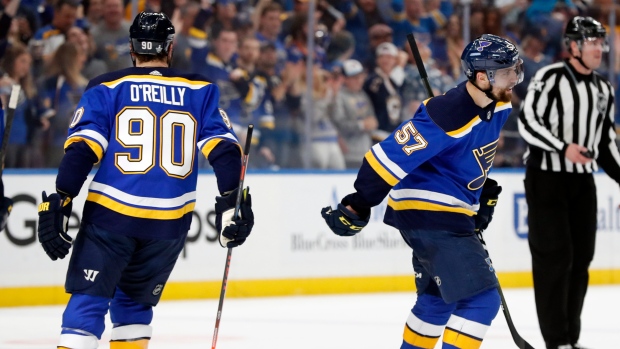 JEFFERSON CITY, Mo. — The home of the St. Louis Blues could receive $70 million in state subsidies over two decades to help pay for renovations that local officials hope will attract more amateur sports events to the arena.

Missouri lawmakers gave final approval Wednesday to the legislation that authorizes funding for the Enterprise Center starting in the 2022 fiscal year. For the first 10 years, the facility could get $2.5 million annually. For the next 10 years, it could receive annual payments of $4.5 million.

The arena is in the middle of its first major renovation since opening in 1994, financed partly by a $69 million bond issue approved by St. Louis. The Blues also have covered some of the costs. The scoreboard, sound system and some of the seats already have been upgraded. The next phase, aided by state money, would focus more on the building's infrastructure such as its escalators, roofing and heating and air conditioning systems.

The fact that the Blues currently are making a run in the NHL post-season was mentioned by more than one state lawmaker during House debate on Wednesday, including by some who eagerly described going to hockey games.

But supporters noted that the improvements may be more instrumental in attracting future NCAA or U.S. Olympic events to the facility as St. Louis bids against other cities with similar arenas. The Enterprise Center already is scheduled to host the NHL All-Star Game, NCAA men's basketball tournament games and USA Gymnastics Olympic trials in 2020.

"Without renovations, and without public-sector support for those renovations, we run the risk of being less competitive in pursuit of national events," said Frank Viverito, president of the St. Louis Sports Commission, a non-profit organization that attracts and manages sporting events.

Blues President and CEO of Business Operations Chris Zimmerman said in an email Wednesday night that the state funding provides the "final piece" to complete a restoration that will make the Enterprise Center "second to none in competing for and earning events that will make a significant difference to our city, community and state."

The legislation authorizing the incentives now goes to Gov. Mike Parson. It passed the Senate 24-10 last week and the House 89-58 on Wednesday.

Some lawmakers objected to using public money for sports stadiums, though Missouri and many other states have a history of doing so.

State Rep. Bruce DeGroot, a Republican from the St. Louis suburb of Chesterfield, denounced it as "a welfare-for-the-rich bill."

Missouri already provides $3 million of annual subsidies for the stadiums used by the Kansas City Chiefs and Royals. The legislation extends those for 10 more years. Some Kansas City area lawmakers expressed hope that the continued state aid could help attract World Cup soccer games in 2026.

It's "a small investment for a chance to host premier events in our state," said Rep. Jonathan Patterson, a Republican from the Kansas City suburb of Lee's Summit who sponsored the legislation.