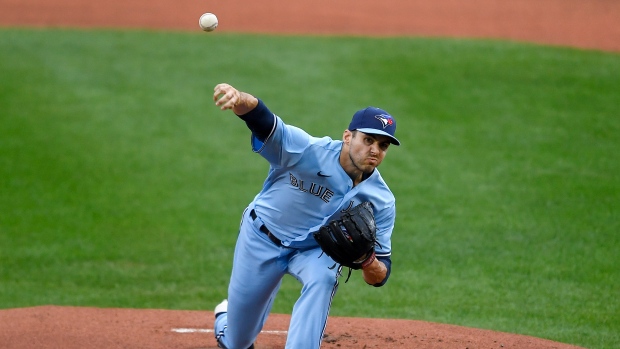 TORONTO — After multiple setbacks with his left oblique injury over the last couple of months, Julian Merryweather hopes to finally be on his way back.

The 29-year-old right-hander, who quickly proved to be a force at the back end of the Toronto Blue Jays bullpen during a brief, four-appearance cameo in April before getting hurt, is throwing off a mound at the team complex down in Dunedin and inching closer to facing live hitters.

“It’s really just kind of unfortunate at this point with the setbacks,” Merryweather said over the phone from Florida. “But the position I’m in now, I’m a lot more confident going into, hopefully, some live ABs and some games here soon in the next week.

Once Merryweather starts facing live hitters, a rehab stint could be on the horizon later this month.

Even though he hasn’t pitched since April 13, he’s a potential difference-maker for the Jays’ bullpen group.

Headlined by a dominant heater that averaged 98.2 mph and a plus changeup, Merryweather’s Toronto tenure has been marked by health issue after health issue, leaving the Berkeley, Calif., native frustrated at times.

“The rehab process will definitely drive you crazy, kind of starting over from square one — back to Go, don’t collect $200, in Monopoly terms,” Merryweather said. “It’s been a grind, man. I’ve been through the rehab thing and it does take a toll, but at the end of the day the time I’m taking now to get right is small in comparison to the length of my whole career.

“It was definitely frustrating getting up to a pretty high intensity level and then having a setback,” he added. “Every time I’d get to a certain threshold, I’d have that same kind of sharp snake bite in the oblique. Just getting so close is probably the most frustrating part, but I kept my head down, working hard and now I’m back in a really good position, probably the best I’ve felt. It’s taken a lot longer than expected, obviously, from my point of view and the team’s point of view, but I’m just excited to, hopefully, be good enough to get back there for this run and help this team solidify what they’ve already been doing most of the year.”

Oblique injuries are notoriously tricky, and Merryweather’s has been exactly that.

The club has used the downtime to take a look at his mechanics.

“We’ve done a lot of deep diving into trying to make mechanical changes, just small tweaks that can kind of alleviate some of the stress I put on the oblique and I feel like a lot of that’s working,” Merryweather said. “It’s just on certain pitches I try to create a little bit more than I normally would. Whether that’s reaching back or changing my posture a little bit or my follow through, so it’s mostly something I can feel on my own.

“My fastball and changeup, it actually feels pretty good on those two. It’s the small differences in mechanics when I throw a curveball or slider, those are the things I’ve focused on. It’s just a matter of getting the reps now in games and having the intensity be where it need to be to get out of here.”

Watching the excitement surrounding his team from afar over the last couple of weeks has given him a boost.

He’s hoping to be a part of it down the stretch.

“Once we put everything together, this team is super dangerous and it’s a lot of fun to watch,” he said as the Jays finished up their series with the Boston Red Sox on Sunday. “The fans up there, the electricity, I can feel it through the phone.”

Sunday’s win over Boston improved the Jays’ record in one-run games to just 8-13 … On Monday, George Springer became the first Blue Jays player to win AL player of the week two weeks in a row … Nate Pearson threw a simulated game Saturday and is expected to progress to rehab games this week. Pearson was sitting 96-99 mph with his fastball across his 18 pitches … Considering he’s been worth 1.3 fWAR across just 166 plate appearances — the 18th most valuable catcher in baseball — it’s pretty amazing Reese McGuire was available for free on waivers back in April. It’s mostly defensive value, but his arm is a weapon and he’s even chipped in with a 95 wRC+. A handful of people believe the confusion surrounding his misdemeanour public masturbation case from spring training 2020 is the reason he’s still a Blue Jay and he’s been able to turn his career around after being DFA'd in April.

That’s the record the Jays have run up since June 19, the best winning percentage in the American League during that stretch at .643.

Their plus-123 run differential trails only the Houston Astros’ plus-149 in the AL.

“It felt like a playoff game. We kind of needed to win this game — and I don’t want to say needed, because every game counts — but if we take today, that’s three out of four against a good team. And to come back like this, it doesn’t get any better than this.”
—Charlie Montoyo on winning Sunday’s series finale against Boston

Five players closest to a promotion to the big leagues when a need arises:
1—UTIL Cavan Biggio, 10-day IL: When he was placed on the IL last week, Montoyo said he hoped Biggio would only need the minimum amount of time. He’s eligible to return from his nagging neck/back muscle issue this weekend.
2—RHP Nate Pearson, 7-day IL: The Jays will be cautious to make sure he doesn’t have another setback with his sports hernia, but he’s trending towards a return before the end of the month.
3—RHP Thomas Hatch, Triple-A: With six starters performing well at the major-league level, Hatch could help the bullpen later on down the line. For now, he’ll stay stretched out.
4—LHP Ryan Borucki, Triple-A: Optioned over the weekend with a 5.12 ERA, the 27-year-old lefty will get some time to figure things out in a low-pressure setting.
5—SS/3B Kevin Smith, Triple-A: In addition to not being on the 40-man roster yet, the play of Santiago Espinal and Breyvic Valera is keeping Smith out of the big leagues.​