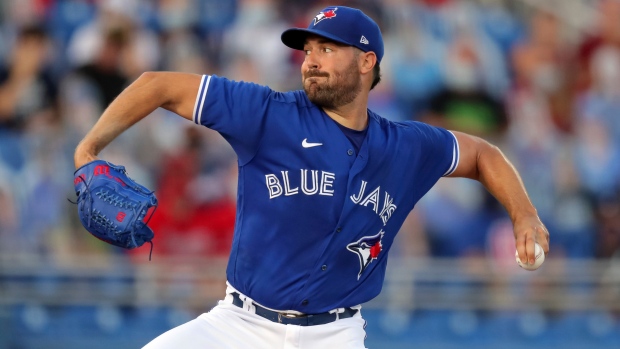 TORONTO — When the Toronto Blue Jays acquired Robbie Ray from the Arizona Diamondbacks last August, he was a broken pitcher.

These days, he looks like a perfectly capable mid-rotation starter, but one who displays flashes of dominance and the upside to go out and win a postseason start with a bushel of strikeouts if his stuff is working that day.

Ray’s four-seam fastball is up above 95 mph for the first time in his career, and he’s throwing the 95.2 mph heater 58 per cent of the time.

But not only is his lively fastball creating less margin for error for hitters, Ray’s also throwing it in the zone 11 per cent more than he did last year and throwing a first-pitch strike a career-high 67 per cent of the time.

“I think there’s a lot of confidence and faith in him from his teammates, which says it all,” Blue Jays general manager Ross Atkins said. “He’s been a great addition. It’s also great to see how he goes about his work and the influence he has on the other pitchers on our team.

“The fastball’s as good as it gets and the slider has, obviously, been effective. He’s mixed in that changeup, but you hit the nail on the head with his command, he’s throwing the ball over and he’s also, at times, really commanded a well-above average fastball.”

The one thing holding Ray back — and dragging down his overall value when you consider he’s been worth minus-0.1 fWAR through seven starts — is he’s extremely susceptible to the long ball, allowing 11 home runs across 40.1 innings.

All of it was on display Sunday as he whiffed nine across 5.2 innings against the Philadelphia Phillies, but also served up a trio of homers to leave his ERA at 3.79 on the season.

The eye test says Ray has cleaned a lot of things up, but there are still some worrying inconsistencies that make him tough to completely trust every fifth day.

If the walk rate suddenly spikes and those home runs become multi-run shots instead of solo shots — eight of his 11 homers given up have come with nobody on — trouble will be brewing.

But for one year and $8 million, Ray is proving to be a bargain and has injected a semblance of stability the rotation behind Hyun Jin Ryu.

If you stack Ray up with the other No. 3 starters in the AL East — Ryan Yarbrough in Tampa, Garrett Richards in Boston and Jameson Taillon in New York — the Jays match up pretty well.

The catch is Atkins will have to find a No. 2 starter before the trade deadline.

With the quirky mannerisms, the backwoods beard and that 97-mph heater, Jordan Romano simply looks like he belongs at the back end of a bullpen. After some elbow issues in mid-April, the 28-year-old has his velocity back, dialling up a 100.7 mph fastball to sit down Andrew McCutchen on Sunday, but the command has been wobbly at times … Vladimir Guerrero Jr. can do a lot of amazing things in a batter’s box, but in this era, it’s absolutely amazing when a hitter can walk more than he strikes out. You may be mesmerized by the tape-measure blasts, but the 27:26 BB:K ratio is absolutely the most impressive statistic he’s putting up, showing how in control he is when he steps to the plate these days … Vladdy, Marcus Semien and Bo Bichette are all on pace to hit 35-plus homers through 39 games … Since returning from his bout with COVID-19, Teoscar Hernandez has not missed a beat, slashing .328/.406/.557 with four homers and 16 RBI in 16 games. He’s entrenched in the cleanup spot and hasn’t hit anywhere else in the lineup this season … Random musing after six recent games against the Atlanta Braves: Has anyone ever seen Freddie Freeman and Buzz from Home Alone in the same room? … The Jays’ bullpen has managed to patch things together through numerous injuries this season, but losing veteran right-hander David Phelps for a long stretch due to a lat strain is going to seriously hurt. He’s now on the 60-day IL … Considering his lengthy history of elbow issues, it was concerning to see Ryan Borucki land on the 10-day IL with a flexor issue, but Atkins says the lefty should be back soon.

Three Mondays ago, back on April 26 when the season was just 21 games old, I wrote this:

“It’s still been less than a month and while the transition to second base defensively has been smooth, Marcus Semien has looked like the player he’s been for most of his career at the plate and not the breakout MVP candidate from 2019. He could catch fire and he’s a valuable vet in a number of ways, but maybe not the one-off star the Jays hoped for with that one-year, $18-million deal in free agency.”

“As it relates to the timing and how we’re making that decision, obviously, his effectiveness is a huge piece of that equation and the objective and subjective views of how effective he will be at the major-league level are all really encouraging … He’s making that something that we’re very much discussing and talking about.”

“Who’s the best team in the AL East?”

ANSWER: This is not an easy question because it really does look like there are four reasonable answers here.

In March, the answer was the Yankees. As of today, the Boston Red Sox are atop the division with 25 wins and a plus-45 run differential, but it looks like it’s going to be a dogfight for the next four months and all four teams could morph considerably in the coming weeks.

With the trade deadline and the potential scrap for top-of-the-rotation starters aside, every single AL East contender has a potential impact addition internally in the second half.

Luis Severino is on his way back to the Yankees’ rotation. Same in Boston with Chris Sale.

Meanwhile, the Rays, who have just a .686 OPS as a team, will add No. 1 overall prospect Wander Franco to their lineup at some point fairly soon, while the Jays have Manoah and Nate Pearson stashed as lottery-ticket arms.

The Red Sox, Jays (plus-36), Rays (plus-20) and Yankees (plus-11) sit three, four, five and six, respectively, in the American League in run differential.

These teams are neck and neck.

Five players most deserving of a promotion when a need arises:

RHP Alek Manoah, Triple-A: Manoah continues to force his way onto the radar with his dominant fastball/slider pairing. Just give it a bit more time. It’s hard to do better than 12 scoreless innings, but we’ll see if the 23-year-old can continue to put pressure on the front office in his third start of the season for the Bisons on Tuesday in Worcester.

RHP TJ Zeuch, Triple-A: The sinker-balling righty will be back in the big leagues when the Jays need length out of the bullpen.

RHP Carl Edwards Jr., Triple-A: A 29-year-old veteran signed to a minor-league deal last week, the best NASCAR name not turning left for a living will likely get a look in the Jays’ bullpen at some point this summer. With a 3.68 ERA across 181 career innings, CEJ is a quality depth arm to have on hand.

RHP Thomas Hatch/RHP Nate Pearson, injured: While Hatch (elbow impingement) has turned a corner and is ramping back up for a return to a rotation role in a couple weeks, Pearson is now dealing with a shoulder impingement and will have a Triple-A start skipped as the Jays try to get their big righty back on track. Any shoulder problem is a major worry, but the Jays currently do not expect him to miss much time.

INF/OF Breyvic Valera, Triple-A: With outfielder Josh Palacios sidelined 6-8 weeks with a hand injury, Valera could now be the next man up in the event of another outfield injury. In addition to his ability to play all over the diamond, it doesn’t hurt that the 29-year-old is raking in AAA with a .341/.440/.537 slash line and five steals in 11 games.

Thought by many to be the most advanced bat in the 2020 MLB Draft, Martin’s plate approach and overall offensive package helped him secure the biggest bonus in franchise history at north of $7 million.

His long-term defensive home aside, one of the questions surrounding Martin when he fell to the Jays at fifth overall last June was how much power he’d hit for as a pro.

That led to me writing this blurb after talking to people who saw Martin at the Jays’ alternate training site in Rochester last summer: “How the power manifests will decide whether he’s a star or more of an across-the-board valuable player. My personal comp for him since the draft has been Alex Bregman … if the power shows up. Bregman faced similar questions about the pop as the second-overall pick in the 2015 draft and then went out and erased those concerns with 14 homers in his first 62 games at Double-A, taking off from there and arriving in the big leagues at the tail end of his first full professional season.”

Well, so far, Martin is doing the opposite of Bregman, as he’s still searching for his first Double-A home run through 10 games and is slashing a muted .222/.364/.333.

The scouting report isn’t changing after 10 games and not hitting a homer in 44 trips to the plate isn’t necessarily a sign of things to come, but Martin’s power numbers are important to track this summer.​