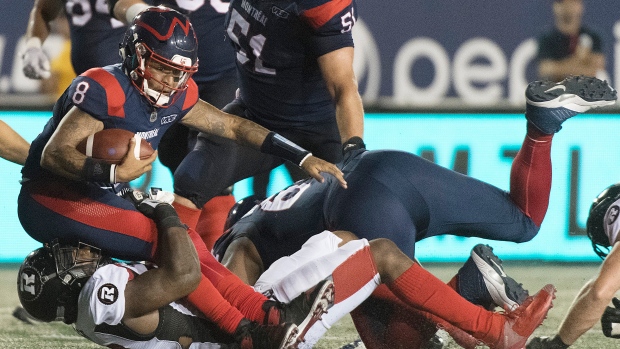 Adams exited Friday's game after taking an apparent helmet-to-helmet hit from Redblacks defensive lineman J.R. Tavai around the nine-minute mark of the third quarter. The Alouettes announced shortly after that Adams was flagged by on duty concussion spotter for an examination.

#AlsMTL #MontreALS Adams Jr has emerged from the dressing room to pump up the crowd in the dying seconds of regulation. #CFL @CFLonTSN pic.twitter.com/6WjMHA8j2Q

The quarterback ultimately did not return to Friday’s game.

The 26-year-old Adams has passed for 1,147 yards and five touchdowns this season against three interceptions. The dual-threat has also added 224 yards rushing along with five touchdowns. Ahead of Friday night's loss, Adams had led the now 3-3 Alouettes to three straight wins.