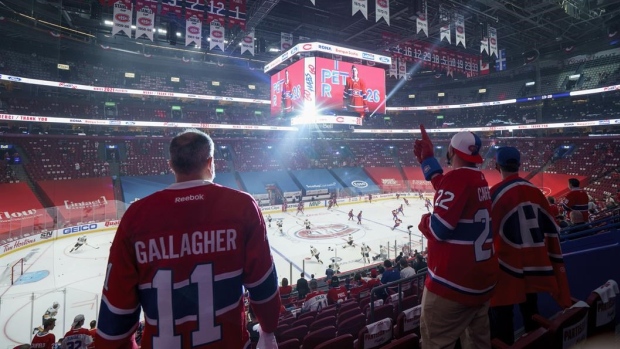 MONTREAL — The Montreal Canadiens say they've asked the province for permission to allow 10,500 fans to attend upcoming playoff games in Montreal, up from 3,500.

France Margaret Bélanger, the hockey team's executive vice-president and chief commercial officer, told reporters Tuesday that discussions with the Quebec government began on Friday, but the team has not yet received an answer.

Bélanger said that with the first home game in the Canadiens' Stanley Cup final series against the Tampa Bay Lightning scheduled for Friday, she hoped to get an answer by the end of Tuesday.

She said the team believes the Bell Centre is big enough to hold more fans safely, and that with Montreal now at Quebec's lowest pandemic alert level and the number of COVID-19 cases in the province continuing to fall, capacity could be increased in the large venue. Provincial health authorities reported 71 new cases of COVID-19 Tuesday and four additional deaths attributed to the novel coronavirus.

"The Bell Centre is two million square feet, so we've got a lot of space, and we intend to use that space to make sure that all these guys are distanced from one another," she said. Fans would sit in 14 sections of several hundred people, she said, with separate entrances and food-service facilities. Mask wearing would be mandatory.

"We've never had a COVID case at the Bell Centre since we resumed our operations there on Jan. 3, and this is what we want. We don't want anything going forward," Bélanger said.

She said the team would be open to requiring proof of vaccination as a condition of admittance, but Quebec has so far ruled out the use of so-called vaccine passports to allow people to access private events.

The Health Department is still studying "if it's possible to accommodate more people at the Bell Centre in a safe manner," spokeswoman Noémie Vanheuverzwijn said in an email late Tuesday afternoon.

Quebec has changed its COVID-19 restrictions several times since the Canadiens began their playoff run, with several of those moves — including increasing capacity at arenas from 2,500 to 3,500 people and extending last call in bars — seemingly motivated by the team's success.

"I worry sometimes if some of the decisions about the congregation of people within arenas is driven by sports passion, rather than by science," said Dr. Donald Vinh, an infectious disease specialist at the McGill University Health Centre in Montreal. "If the Montreal Canadiens weren't in the playoffs, would we be allowing this to occur? I'm not sure."

Vinh said in an interview Tuesday he worries about the ability to maintain distancing and enforce mask wearing in an arena. He said that if more fans are going to be allowed to attend, requiring proof of vaccination would make sense.

Dr. Leighanne Parkes, an infectious disease specialist at Montreal's Jewish General Hospital, said that without proper safety measures, increasing arena capacity has the potential to be a "superspreader" event.

But, if steps are taken to mitigate risks, such as mandatory mask wearing and the use of rapid tests, increased arena capacity — and the creation of other "safe viewing areas," such as in city parks — could be safer than the large unofficial gatherings that occur outside the arena on game nights.

In particular, she said, having controlled viewings of the game would allow for contact tracing if someone is infected.

She said this is an opportunity for public health to say "we're going to do it in as safe a way as possible, because it's going to happen regardless," she said.

The team plans to show away games to 3,500 fans on the large screen inside the arena starting Wednesday. Montreal Mayor Valérie Plante has said the city wants to organize outdoor showings of games, but on Tuesday, her office said it had no update on when that might happen.

Vinh said he thinks the screenings would be a good idea.

While it's not realistic to prevent people from gathering, having an organized screening — or multiple organized screenings — would be a "harm reduction" approach that could help enforce some level of distancing and mask wearing as well as keep crowds smaller, he said.

This report by The Canadian Press was first published June 29, 2021.