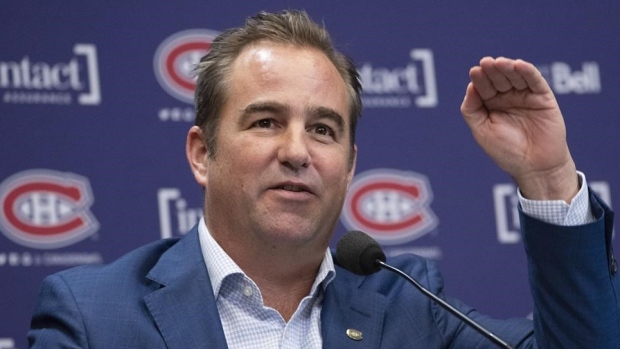 As the Montreal Canadiens search for a new general manager, Arpon Basu and Marc Antoine Godin of The Athletic report that at least three women are on the team's "extensive list" of candidates.

Canadiens president, CEO and co-owner Geoff Molson is working alongside newly hired executive vice president of hockey operations Jeff Gorton, minority owner Michael Andlauer and franchise stalwart Bob Gainey in the search to find a replacement for Marc Bergevin. Molson previously stated that the new general manager would work in tandem with Gorton, with deciding the future of the team's coaching staff among their responsibilities.

In the meantime, Gorton has confirmed Dominique Ducharme will remain in place as head coach through at least the remainder of this season.

While the team has stated the next general manager must be able to communicate in both English and French, Molson said last month the successful candidate could potentially have no previous experience as a general manager in the NHL. He noted that Bergevin had not previously held the title of general manager when he was hired in 2012.

Basu and Godin report the Canadiens plan to interview all candidates on their list for the vacant position, making for a lengthy process.

It is unclear whether Canadiens legend Patrick Roy, who has publicly expressed his interest in the job, will be granted an interview.

"I've heard of him, yes," Gorton said when asked about Roy on Dec. 3. "I have a tremendous amount of respect for him for what he's done in hockey and I know he's an emotional guy who speaks his mind. We'll look at everyone."

After reaching the Stanley Cup Final last season, the Canadiens currently sit last in the Atlantic Division with a 6-20-3 record.