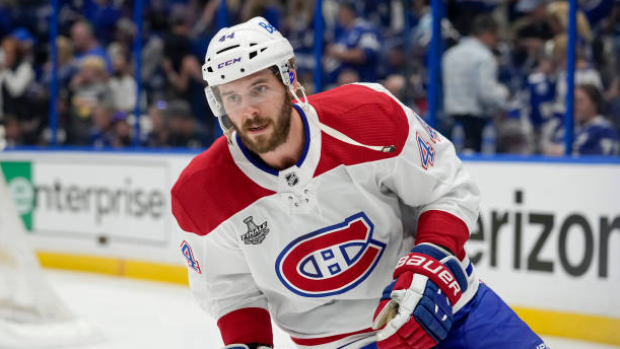 The Montreal Canadiens are battling through quite a few injuries at the moment and updated the status of multiple players on Friday.

Edmundson — slow progress on lower back injury, out indefinitely.

Dvorak — UBI, not a concussion. Out through all star break.

Armia and Caufield will arrive in Mtl later today.@TSN_Edge

Forward Jonathan Drouin will be out indefinitely because of a right wrist injury, however it's not the same wrist that required surgery in 2019.

The 26-year-old has not played since Jan. 20 against the Vegas Golden Knights. In 32 games this season, Drouin has six goals and 20 points, his fifth season with the Canadiens.

Defenceman Joel Edmundson is making slow progress on a lower-back injury that has kept him out the entire season but he continues to be without a timetable for his return. This is his second season with the Habs after being acquired in a deal with the Carolina Hurricanes in September of 2020.

Forward Mathieu Perreault has not played since Dec. 14 and continues to be sidelined with a lower-body injury. The team says he will be out for three or four weeks. In 14 games prior to the injury, Perreault had three goals and one assist.

Forward Christian Dvorak left Monday's game against the Minnesota Wild due to concussion protocol and took a therapy day for the team's skate on Wednesday. The Habs announced Friday that Dvorak does not have a concussion but he is being placed on the injured reserve list and will be out until the All-Star Break.

Meanwhile, the team announced that forwards Cole Caufield and Joel Armia are returning to Montreal later on Friday after they were placed in COVID-19 protocol last week. Armia has one goal and four assists in 32 games so far this season while Caufield has one goal and seven helpers in 29 games.

The Habs (8-27-7) next play on Saturday when they host the Edmonton Oilers and enter play Friday with an NHL-low 23 points.