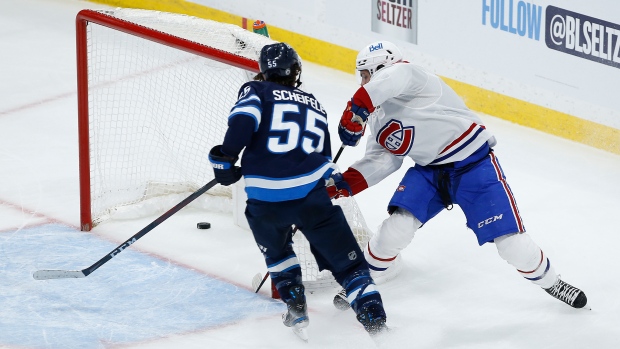 Montreal Canadiens forward Jake Evans is doing better and resting at the team hotel after taking a hit from Winnipeg Jets’ forward Mark Scheifele, according to head coach Dominique Ducharme.

Ducharme also confirmed that Evans suffered a concussion on the hit and will be out indefinitely.

The 25-year-old spent last night at the team’s hotel after being examined by doctors who didn’t feel it was necessary for him to stay overnight in the hospital.

Ducharme confirms that Evans is sidelined with a concussion.

Defenceman Jeff Petry added that the team is not focusing on retribution against Scheifele but continuing to play the same way that has made them successful in the playoffs.

“Obviously we all know what happened last night and the best way to get back at them for that is to win the series,” said Petry, during his afternoon availability. “Our focus is to make sure we’re playing the way we’ve played the last three games and make them pay that way.”

“That’s why we have someone looking over them and making people accountable with suspensions.”

Ducharme also said the team could move forward with 11 forwards and seven defencemen in Game 2 but will likely stick with 12 forwards with the possibility of defenceman Alexander Romanov drawing into the series. Forward Artturi Lehkonen is also available after missing the past five games with an undisclosed injury.

#Habs Ducharme says 11F, 7D is a possibility for Game 2 but is likely sticking with 12 & 6 with the option of Romanov drawing into the series. Lehkonen is also available for Friday. @TSN_Edge

The Canadiens lead the series 1-0 after Wednesday’s Game 1 win.