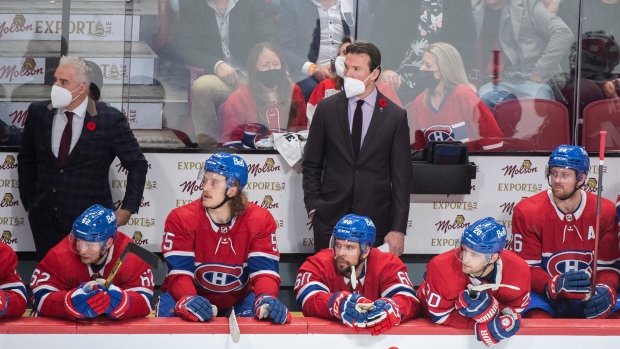 The Montreal Canadiens have won just one of their past six games and dropped to an Eastern Conference-worst 3-10-1 record with Tuesday's overtime loss to the Los Angeles Kings.

However, the Canadiens expressed confidence after Tuesday's 3-2 loss that their season will start to turn around in the near future.

"We work so hard in practice, we work so hard in games," forward Jake Evans said. "We're a tight team and everyone would take a bullet for each other, so we've just got to get back to it. And I do really think we're growing and we're getting better as a team and we're fixing our problems, and I think it's only going to go up from here."

Los Angeles has defeated the Canadiens twice during their current six-game winning streak and Montreal winger Tyler Toffoli, a former King himself, said his current team could learn from their success.

"They have young guys that work, and they have older guys that are pulling and leading the way," Toffoli said. "So, I think that we can definitely take note of that and just keeping working ourselves, just keep pushing and keep grinding.

"It's frustrating not being able to pull out these wins, but we're doing a lot of good things and eventually they're going to start turning in our direction."

Just four months removed from reaching the Stanley Cup final, the Canadiens have a negative-20 goal differential this season, second worst in the NHL ahead of only the Arizona Coyotes (-30).

Montreal will wrap up its current five-game homestand on Thursday against the Calgary Flames before embarking on a three-game road trip.