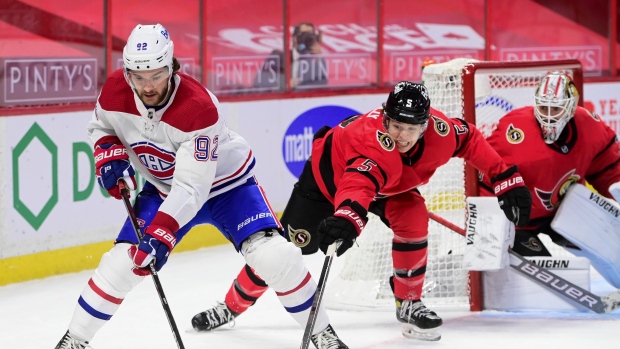 Montreal Canadiens forward Jonathan Drouin will take an indefinite leave of absence from the team for personal reasons, the Canadiens announced on Wednesday.

The 26-year-old has been placed on long-term injured reserve by the club, who added "We ask everyone to respect his privacy."

"The most important thing right now is Jo taking care of what he needs to take care of," Canadiens head coach Dominique Ducharme said Wednesday. "When I heard his name this morning, I don't think hockey, I think about the person."

Drouin has missed Montreal's last three games as he has dealt with a "non-COVID illness."

Forward Jonathan Drouin will take an indefinite leave of absence from the team for personal reasons.

He was placed on long-term injured reserve by the club. We ask everyone to respect his privacy. pic.twitter.com/bfy5F7afY6

In 44 games this season, the winger has scored two goals and added 21 assists. He is currently in the fourth season of a six-year, $33 million deal signed in 2017, which carries a $5.5 million cap hit.

Selected third overall by the Tampa Bay Lightning in 2013, Drouin was acquired by the Canadiens in 2017 in a deal that saw defenceman Mikhail Sergachev head the other way. He has 69 goals and 232 points in 393 career games with the two teams.

Hoping for the best for #Habs Drouin, taking a leave of absence indefinitely for personal reasons.

Drouin on LTIR leaves $5.82M of $9.25M available, which enables flexibility to keep Caufield and Evans on the active roster. @TSN_Edge

The Canadiens, who sit fourth in the North Division, will host the Toronto Maple Leafs on Wednesday.