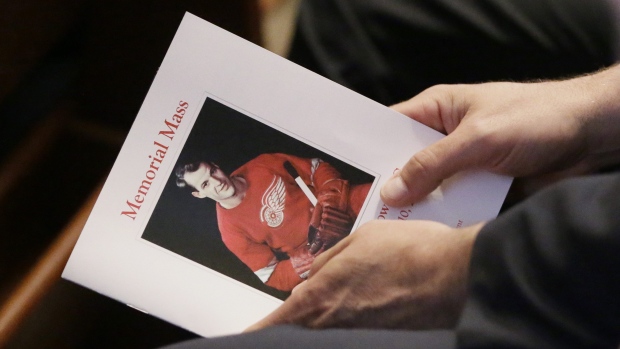 DETROIT — Mark Howe paused, then turned away from the camera, choking back tears.

The Howe family knew this day would come — not even Mr. Hockey is immortal — but that didn’t make it any easier. There is no way to prepare for goodbye.

“It’s just hard,” Mark said, minutes after his father’s funeral mass concluded. “I’m just extremely thankful dad was able to hang on so long at the end. I really wanted to be with him. I was rubbing his forehead as he went.”

The hockey world bid farewell to Gordie Howe on Wednesday, with luminaries from Wayne Gretzky and Guy Lafleur to Chris Chelios and Dylan Larkin paying their respects in a moving service at the Cathedral of the Blessed Sacrament in downtown Detroit.

Howe passed away last Friday at the age of 88.

“My brother Murray spoke so highly of my father and the way we feel and the person my father was,” Mark said. “I would have never been able to get through that.”

Murray got through the eulogy with a touch of humour, offering insight into what it was like to grow up being the son of one of the best hockey players ever to lace up skates.

“He once signed an autograph for a little boy named Gordie, named after him, and a woman came up to him and asked ‘Are you someone famous?’” Murray recounted. “My father said, ‘No, I used to babysit that guy.’”

But Murray said the Howe children, too, grew up in awe of their dad. Murray often referred to his father as “Mr. Hockey” throughout the eulogy.

“I still pinch at the realization that he was my father,” Murray said.

Howe left his children with many life lessons over the past 60-plus years.

One was: “Don’t ever gripe about the cards you’ve been dealt. Don’t worry about anyone else’s cards. Just be thankful you get to play,” Murray remembered.

Howe had a lasting impact on the hockey community at large, embracing what it meant to be a professional hockey star in the community. He wanted to make approaching fans feel at ease, no matter the circumstance.

“I think what I’ll remember is just how genuinely nice of a person he was,” Gretzky said. “Every story I knew about Gordie was a good story, a positive story. He had this way of making people smile and laugh.

“Athletes today are getting bigger and better, but what you don’t replace is their personalities.”

Gretzky called acting as one of Howe’s pallbearers one of the highlights of his life. He idolized Howe, studying his life and writing book reports about him as a kid growing up in Brantford, Ont.

“I was never a very good student. I didn’t read a lot of books. I couldn’t wait to get to the hockey rink most days. I didn’t get many A’s in school, unless it was a book report on Gordie Howe,” Gretzky said. “That was my life.”

Howe cannot be replaced. Helicopters and horse-mounted police stood vigil at his funeral, keeping the horde of media and onlookers at a distance. An entire city block was closed to traffic one day after lines of fans snaked around Joe Louis Arena for a public visitation.

Numerous billboards and signs around downtown Detroit celebrated Mr. Hockey and offered well wishes. The mayor of Detroit attended the funeral, along with Michigan’s governor and other hockey royalty.

“I was eight years old and I used to listen to his games on the radio,” former Red Wings teammate Frank Mahovlich said. “I looked up to him as a player and ever since. We’ve lost a great man.”

“I asked my dad a few years ago what he would like me to say at his funeral,” Murray said. “He said, ‘Say this: Finally, the end of the third period.’ Then he added, ‘I hope there is a good hockey team in heaven.’”

Once in heaven, the funeral’s celebrant priest joked: “I hope he doesn’t elbow too many angels.”

Mr. Hockey was too much of a gentleman for that.

“Mr. Hockey left the world with no regrets,” Murray said. “And although he did not lead the league in church attendance, his life has been the epitome of a faithful servant."

“My gosh,” Gretzky said. “The world today isn’t as good of a place as it was when we had Gordie.”