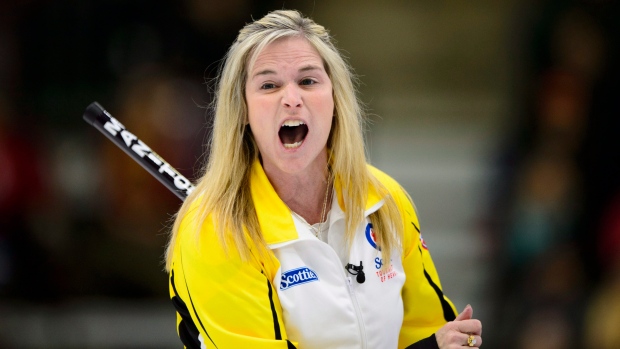 PENTICTON, B.C. — Manitoba's Jennifer Jones is heading to the Scotties Tournament of Hearts final after defeating Wild Card Kerri Einarson 9-7 on Saturday in the Page 1-2 playoff.

Jones, who already holds five national titles, scored two in the 10th end to break a 7-7 tie and secure her place in the Canadian women's curling championship draw on Sunday.

Einarson's rink from East St. Paul, Man., still has a chance to reach the title draw through the semifinal. She will face Nova Scotia's Mary-Anne Arsenault in Sunday's semi.

Einarson opened the scoring with a deuce in the second end only for Jones to reply with two of her own in the third.

Jones put the pressure on Einarson in the fifth end when she scored three to turn a 3-2 deficit into a 5-3 lead.

But Einarson responded with two in the next end and stole a single in the seventh to regain a one-point advantage.

Jones came right back with a deuce in the eighth only for Einarson's single in the ninth to tie it 7-7.

"A great game, well played, lots of great shots," said Jones who will be looking on Sunday to tie Colleen Jones for the most Scotties titles.

"I think the two shots that stand out were when we saved the end in the second that could have been a five (for Team Wild Card) — or maybe my first shot in five when we set up the three. That gave us momentum."

"I felt we played really well, put some pressure on them," said Einarson. "Just in the ninth I let things get away. We were trying to blank, and they got two."

Earlier in the day, Arsenault led her team into the semifinal by defeating Northern Ontario's Tracy Fleury 6-2.

"It was so nice to put a really good game together. I'm so proud of my girls," Arsenault said. "Any time we got into a bit of trouble then Jen and Christina (second Jennifer Baxter and third Christina Black) would get us back out of trouble so it was awesome."

Nova Scotia broke the game open against Northern Ontario by scoring three in the sixth end to go up 5-1.

Arsenault's only two losses at this year's event have come against Einarson and Jones.

"We just play like we did (Saturday) and we'll be right in it."

Nova Scotia opened the scoring against Northern Ontario with a deuce in the fourth.

Fleury answered with one in the fifth before Arsenault's big sixth. Northern Ontario added a single in the eighth, but couldn't mount a comeback.