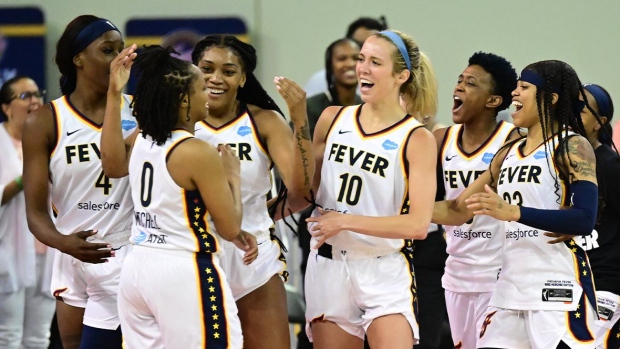 INDIANAPOLIS -- — NaLyssa Smith scored a career-high 26 points — including a go-ahead three-point play in the closing seconds to help the Indiana Fever erase a 15-point second-half deficit and beat the Chicago Sky 89-87 on Sunday.

Smith was fouled as she hit a turn-around jumper from the left block and made the free throw to give the Fever an 88-87 lead with 39 seconds left.

Chicago missed two shots on the other end before Victoria Vivians was fouled with 7.8 seconds remaining. She made 1-of-2 free throws to give the Fever a two-point lead.

After the Sky called a timeout, Courtney Vandersloot missed a short baseline jumper and the Fever held on.

Kelsey Mitchell added 13 points and nine assists for Indiana (5-13). Emma Cannon, who went into game with 14 points this season — scored 11 points and Hull finished with a career-best 10 points. Smith, the No. 2 overall selection in April's draft, was 11-of-17 shooting and had 11 rebounds.

Kahleah Copper made 8 of 13 from the field, 4 of 6 from 3-point range and 8 of 10 from the free-throw line and finished with a career-high 28 points for the Sky (10-5). Vandersloot added 13 points and seven assists and Meesseman had 12 points, eight rebounds, four assists and three blocks.

Chicago's Candace Parker, who averages 12.4 points, 7.9 rebounds and 4.5 assists per game this season, missed her second consecutive game due to a knee injury.

Copper converted a three-point play in the closing seconds of the first half and made two free throws to open the third quarter to cap a 21-3 run and give the Sky a 15-point lead — their biggest of the game.

Smith scored six points and Mitchell the other four in a 10-0 run over the next 2 minutes and Danielle Robinson hit two free throws to give the Fever a 57-56 lead with 4:20 left in the third.