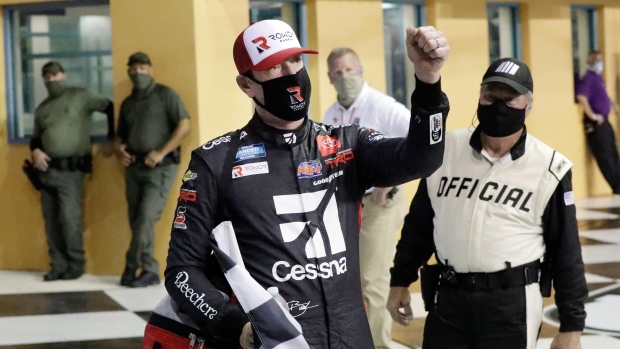 The NASCAR Cup Series is about to go back-to-back.

For the first time since 1971, NASCAR will run Cup Series races on consecutive days this weekend at Pocono Raceway.

Who were the winners the last time the Cup Series went back-to-back?

It will be the first Saturday event at Pocono since the Cup Series held its initial race at this track all the way back in 1974.

When it comes to racing at Pocono in recent years, it’s been Kyle Busch and then everybody else.

Will that trend continue this weekend?

Here is a closer look at the betting odds for the Pocono Organics 325.

Busch enters this weekend with three wins in his last six Pocono starts.

He’s led 374 laps over that span – twice as many as any other driver.

The defending Cup Series champion has gone seven-for-seven for top-10 finishes here since 2016.

After failing to record a win through 13 starts this season, the driver of the No. 18 Joe Gibbs Racing Toyota is due for a strong performance at one of his favourite tracks.

With a chance to become the first driver ever to win a Cup Series race at Pocono in four consecutive years, Busch is an obvious choice to be a favourite in Saturday’s Pocono Organics 325.

All eyes will be on that No. 18 car as it chases its first win of the season.

Pocono Raceway is one of just four tracks where Harvick has never won a Cup Series race.

So why is Harvick a co-favourite to win this event?

He’s also placed no worse than sixth in six of his last seven appearances here.

On the heels of three straight starts in which he has finished no better than 10th, the expectation is that the current Cup Series points leader will bounce back this weekend.

Still, it does seem like a stretch to see Harvick listed at the same price as Busch for Saturday’s race.

For the first time since 2010, Hamlin has three Cup Series wins through 13 starts.

In 2010, Hamlin picked up his fourth victory of the season at Pocono Raceway.

Will history repeat itself?

A five-time winner at this track, Hamlin will have a couple of opportunities to tie Jeff Gordon’s all-time Cup Series wins record at Pocono this weekend.

Elliott doesn’t have the same level of experience at Pocono as the big three.

However, he has fared pretty well since he debuted at this track back in 2016, with six top-10 results in eight Cup Series starts.

Despite matching his worst result of the year at Talladega, Elliott has produced five top-10s in his last seven starts, including a win at Charlotte and two runner-up results.

With the best Average Driver Rating (106.7) and the best Average Running Position (8.2) among Cup Series drivers this season, it’s no surprise Elliott is featured among the drivers with the shortest odds to win Saturday’s race outright.

Keselowski hasn’t won at Pocono since August of 2011.

However, he has registered top-five finishes in seven of his last nine starts here.

With a pair of victories to his name since NASCAR returned last month, Keselowski shouldn’t be overlooked.

Over the last 20 seasons, the JGR stable leads all teams with 12 victories at this course.

In the last race at Pocono in July of 2019, Joe Gibbs Racing finished 1-2-3 with Hamlin, Erik Jones and Martin Truex Jr.

While Jones is still looking for his first win here, he’s proven he can contend with three straight top-five finishes at Pocono.

At +1200 odds, Jones is on the radar as a sleeper option this weekend.

If you are looking to take a chance on a long shot to win Saturday’s race, Byron might be the best bet.

The driver of the No. 24 Chevrolet for Hendrick Motorsports has three straight top-10 finishes at Pocono.

Over the last four Cup Series races at this track, only Kyle Busch and Harvick have produced a better average finish than Byron.

At the very least, Byron could be a decent option to bet on to place in the top-10 in Saturday’s Pocono Organics 325.

*All Betting Information appears as listed by Bodog on Friday June 26, 2020.