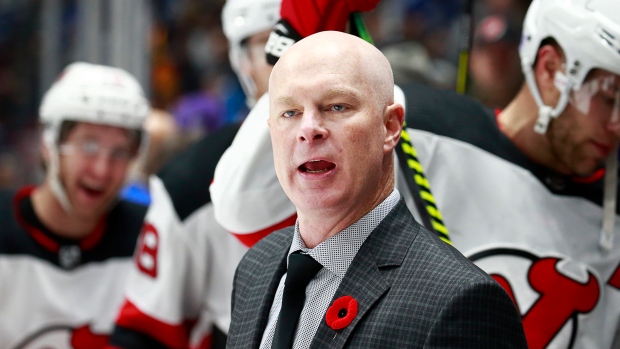 Hynes, who was fired by the Devils in December after a 9-13-4 start to the season, becomes just the third head coach in Predators history, following Laviolette and Barry Trotz.

"John Hynes is bright young coach and great leader who has a track record of both effectively developing young players and successfully motivating veterans," Predators general manager David Poile said. "We love his coaching resume and are confident that he has learned from every stop during his career, and has the best skill set to get the maximum potential out of our team."

Laviolette was fired Monday along with assistant coach Kevin McCarthy after the team posted a 19-15-7 record through 41 games.

The Predators, who currently sit sixth in the Central Division and five points back of the Winnipeg Jets for the final wild-card spot, will host the Boston Bruins on Tuesday night.

"This is a tremendous opportunity to join an organization with a history of success, a team with immense talent and a phenomenal fanbase," Hynes said. "This organization has a strong foundation, from its ownership and executives to the entire front-office staff, and I'm excited to come in and try to maximize this team's abilities."

Nashville has reached the playoffs in each of the past five seasons since Laviolette was hired in 2014, and lost to the Pittsburgh Penguins in the 2017 Stanley Cup Final.