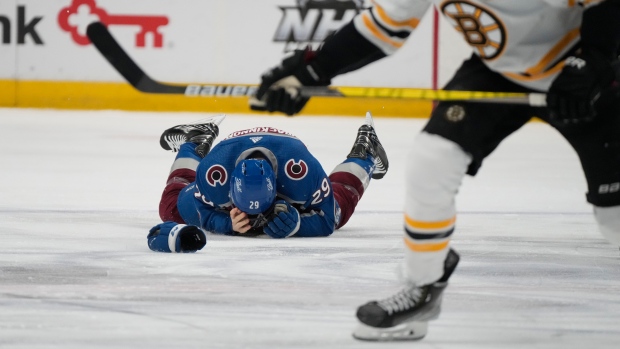 MacKinnon had surgery on his nose, Bednar said.

Ryan Murray could play Tuesday. Both he and Darren Helm should be back by after the All-Star break.

Bednar originally said earlier this week that his star forward would miss at least three games after being injured in Wednesday's game against the Boston Bruins.

MacKinnon suffered a cut to the face early in the first period and did not return. He took a shoulder check from Bruins' forward Taylor Hall and upon contact, had his own stick pushed up into his face. MacKinnon was down on the ice in obvious pain for several minutes, with blood visible on the ice. He eventually skated off under his own power with a towel pressed to his face.

Hall was originally given a five-minute high-sticking major on the play, but after an official's review, the penalty was reduced to a minor for interference. MacKinnon was injured on just his second shift as the Avs went on to win 4-3 in overtime.