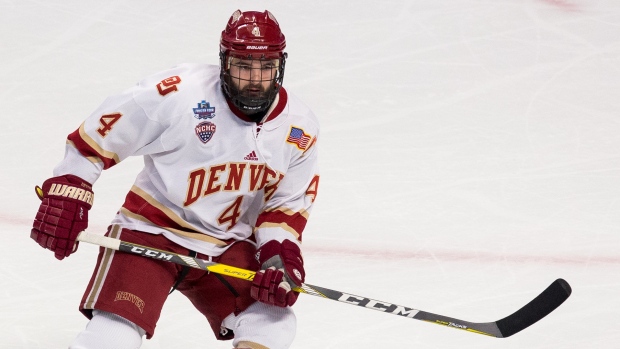 Will Butcher is down to three or four NHL teams he could possibly sign with, according to TSN Hockey Insider Darren Dreger.

Dreger notes the standout free agent defenceman is expected to announce his decision this weekend or by early next week.

Butcher became a free agent last week when his rights with the Avalanche expired. Teams are restricted to signing him to a two-year contract with a maximum annual salary of $925,000, though bonuses can be added.

The former University of Denver blueliner has drawn interest from several NHL teams. His agent Stephen Bartlett confirmed a Denver Post report last week that he has had discussions with the Buffalo Sabres, New Jersey Devils and Vegas Golden Knights.

The Colorado Avalanche drafted Butcher 123rd overall in 2013 and had until last Tuesday to sign the Hobey Baker Award winner, who led Denver to a national championship in April. "He wanted to test the market and that is his right and decision," the Avalanche said in a statement last week.

The 22-year-old from Sun Prairie, Wisconsin capped his senior season at Denver with seven goals and a team-high 30 assists in 43 games and became just the seventh defenceman to win college hockey's top honour. Overall, he had 28 goals and 75 assists for 103 points in 158 games with the Pioneers.

Butcher is the second Hobey Baker winner in as many years to pursue free agency after completing his college career.

Last summer, Harvard forward Jimmy Vesey turned down contract offers from Nashville and Buffalo before signing with the New York Rangers, for whom he had 16 goals and 27 points in 80 games. Nashville drafted Vesey and traded his rights to the Sabres once it became clear he wasn't going to sign with the Predators.