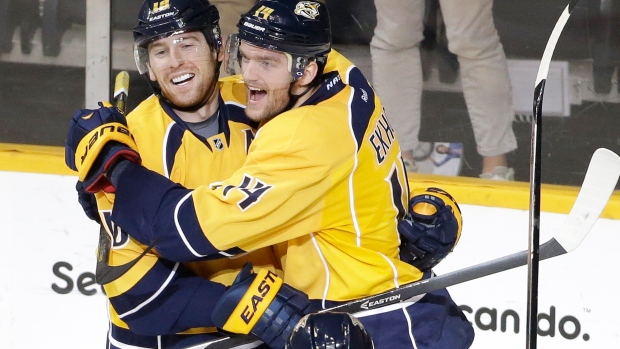 NASHVILLE, Tenn. - Peter Laviolette and his Nashville Predators, the only team in the NHL still unbeaten in regulation this season, believe they still can play better.

James Neal showed he is just starting to get comfortable, too.

Neal scored a natural hat trick, and Pekka Rinne made 30 saves in the Predators' 3-2 win over the Chicago Blackhawks on Thursday night.

"It's early in the season. We're a new group, it's a new coach and a new system, and the guys they're working hard at it," Laviolette said. "Tonight was a good win.

"Last game I don't think we were at our best, so consistency would be one of the things you could easily throw out there. Tonight, the guys were on point."

The two Central Division rivals came in as the only teams yet to lose in regulation. They played into overtime six nights earlier in Chicago with the Blackhawks winning 2-1, a game in which Nashville managed only 12 shots through the first two periods.

That loss hurt more because the Predators were on the power play when Jonathan Toews scored a short-handed goal for the win.

"We didn't like the way we ended against Chicago last game," Neal said. "We got a little redemption."

The Predators earned points in their seventh straight game before a sellout crowd, continuing their best start since the 2010-11 season when they got points in each of their first eight.

For Neal, it was the fifth hat trick of his career. Acquired in a trade with Pittsburgh in June, Neal has five goals in four games. Filip Forsberg had two assists.

"That was awesome," Rinne said of Neal's hat trick. "It's nice to see that kind of sniper. He has one of the better shots for sure in the league, and he used it tonight. Beautiful goals a couple of them, and obviously a huge game by him."

With Chicago trailing 3-1, Shaw tipped a rebound past Rinne at 12:36 of the third. That gave Chicago fans making the trip down for the game a reason to get loud again.

The Blackhawks pulled goalie Antti Raanta for the extra attacker. Rinne gloved the puck out of the air with 1:18 left with Shaw trying to score. Chicago coach Joel Quenneville took his timeout, but the Blackhawks couldn't beat Rinne despite outshooting Nashville 32-27.

Quenneville called the third the Blackhawks' best period by a mile.

"They came at us hard, and they get their turn in this building," Quenneville said. "But you get down by two, and you put yourself in a tough spot."

The Blackhawks left goalie Corey Crawford at home for this two-game road swing because of an upper body injury, and Raanta got his second straight start.

The Predators outshot Chicago early with a flurry of action in front of Raanta. But Smith flipped a wrister over Rinne's outstretched leg off a rebound at 12:21 for a 1-0 lead for the Blackhawks.

Nashville failed to take advantage of a power play when Marcus Kruger went to the box for high-sticking Colin Wilson, but defenceman Seth Jones found Neal with a nice cross-ice pass. Neal beat Raanta off his stick, tying it 1-1 in the final minute of the period.

Chicago got its only man advantage at 13:07 of the second, and the Blackhawks took turns shooting at Rinne. He stopped drives from Toews and Patrick Kane, and a slap shot from Patrick Sharp in killing the penalty.

"We just couldn't find a way," Toews said. "We only got one power play in the second period, and it just wasn't going for us. And it was the same story late in the third."

The Predators broke the tie at 16:12 of the second when the puck squirted over to Neal just inside the left circle near the slot, and his slap shot beat Raanta's glove. Neal completed his hat trick at 1:52 of the third from the side on a wrister.

NOTES: Neal's previous hat trick was Dec. 29, 2013, against Carolina while he was with the Penguins. It was Nashville's first hat trick at home since Sergei Kostitsyn had one on Jan. 1, 2012. ... Predators forward Mike Ribeiro had an assist on Neal's goal, giving him points in five straight. ... Neal's third goal was the first allowed by the Blackhawks in the third period this season. ... Forsberg has a team-high six assists.