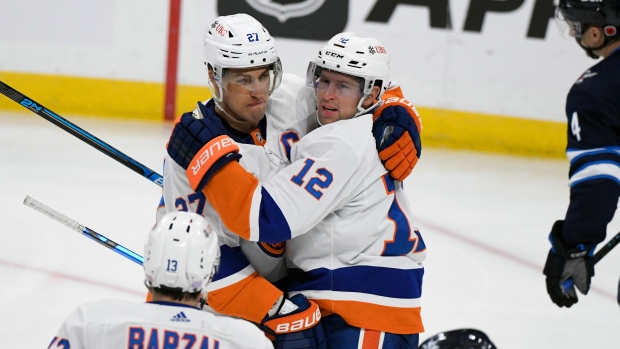 WINNIPEG — Ilya Sorokin earned his first night off of the season.

Sorokin stopped all 24 shots he faced for his league-leading third shutout of the season to backstop the New York Islanders to a 2-0 win over the Winnipeg Jets Saturday night.

Sorokin will play backup to Semyon Varlamov for the first time this year when the Islanders play the Minnesota Wild Sunday in the second game of a back-to-back, coach Barry Trotz confirmed.

“He’s so steady back there," said Islanders captain Anders Lee, who said Sorokin gave his teammates the confidence to generate offence in front of him. "You can see it in his eyes. How calm he is back there, how quick he is."

Lee scored what turned out to be the winning goal just 3:12 into the first period while centre Brock Nelson added the insurance marker 47 seconds into the third.

Eric Comrie stopped 29-of-31 shots in the Jets net, registering his first loss of the season after starting with straight three wins.

Sorokin was very appreciative of his many teammates who sacrificed their bodies in front of him.

“The guys made big work," he said. "They blocked many shots and no penalties." (The Islanders took one minor penalty.)

Sorokin shares the league shutout lead with Jacob Markstrom of the Calgary Flames.

Sunday's contest in Minnesota will be New York's 10th game of a 13-game season-opening road trip. Varlamov will make his first start of the season.

The Jets were dealt their first home loss of the season. The shutout defeat also ended their eight-game streak (6-0-2) in which they had earned at least one point.

Trotz said it was a strong team effort that made it possible.

“We know that our goaltenders are very strong and very capable," he said. "You look at certain stats, you can tell your team is playing as a team. We had 19 blocked shots. Winnipeg puts a lot of pressure on your net. We had 26 hits.

“I like the way we played, we had four lines going. We had a little rough patch in the second. (Jets centre Mark) Scheifele missed a real good look. You need a little luck there.”

Jets coach Paul Maurice said the contest was a “grinder” for his players, who didn’t generate many Grade-A scoring opportunities.

“Our two best chances don’t go for us and then we get an awful lot blocked, but that’s a big part of what they do and how they play,” said Maurice. “We spent enough time in their end, didn’t manufacture enough second chances. We had possession but we didn’t get enough chaos caused. But they do that very well. They’re built for that.”

The Jets pulled Comrie with a little less than two minutes to go in the third period but were unable to beat Sorokin. The Jets managed zero shots on net in the last four minutes of the game.

Each team took one minor penalty but neither squad was able to capitalize with the man advantage.

The Jets lost Scheifele and fellow forward Paul Stastny in the third period. Scheifele appeared to injure his knee after getting tangled up with Islanders defenceman Adam Pelech. Stastny was hit in front of the Islanders’ net by one of his own defencemen.

The Jets host the St. Louis Blues on Tuesday, the fourth contest of their season-long seven-game homestand.

NOTES: Saturday’s attendance was 13,424, the fifth-straight non-sellout game for the Jets. ... Winnipeg had defeated the Chicago Blackhawks 5-1 less than 24 hours earlier.