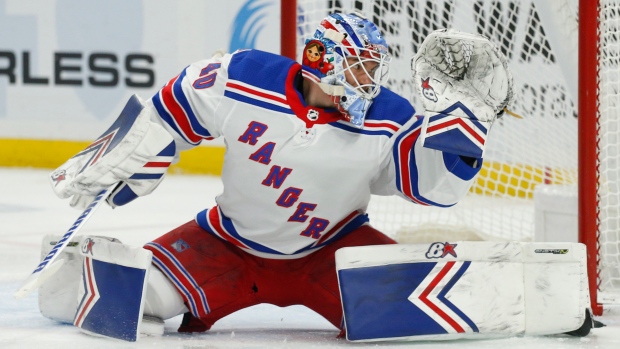 The National Hockey League’s trade deadline is one of the most active parts of the calendar year for front offices, as buyers attempt to bolster their ranks heading into the playoffs and sellers secure assets for future roster-building efforts.

In many ways, the trade deadline forces buyers and sellers to work with one another to satisfy their respective goals.

These playoff-bound teams all stand in the way of one another, and in most cases, the talent gap is razor-thin. This relationship lends itself to benefit the sell side in a seller’s market – after all, there are only so many quality players to be acquired via trade.

A unique environment surrounds this year’s deadline. In light of post-COVID salary-cap pressures and general financial inflexibility around the league, there may be roster-building opportunities for seller teams.

This is where the Montreal Canadiens – a team entering a significant rebuild phase this season – have a window of opportunity. The roster will continue to be stripped as they position for salary cap relief and the acquisition of more future assets, with the team’s core being rounded out over the next couple of seasons.

Among the critical issues to address for general manager Kent Hughes is a woeful goaltending situation that’s as opaque as ever with 34-year-old Carey Price and his massive contract lingering on long-term injured reserve.

The 26-year-old is near the top of TSN’s Trade Bait board for a few reasons. Chief among them is the fact that Rangers goaltender Igor Shesterkin looks like a Henrik Lundqvist clone, and has a genuine shot at this year’s Vezina Trophy.

Georgiev’s contract is also set to expire, so the Rangers must weigh the value of having a phenomenal goaltending tandem against overspending on the position long-term.

Georgiev also hasn’t been the same player we saw when he entered the league in the 2017-18 season, which must hold some weight for Rangers general manager Chris Drury. If we look at Georgiev’s results since entering the league, there is a notable downtrend in his stop rates.

I’ve overlaid Price for a point of reference: 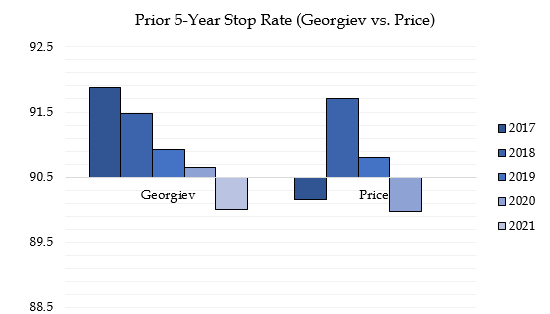 That’s an ugly downtrend for Georgiev. Any time you see performance year-over-year sliding like that, it raises alarms.

But there is important context here. First, Georgiev’s first two seasons were extraordinary for a young player, so much so that a multi-year downtrend only saw him dip below league averages for the first time this season. Compare that to a goaltender like Price, notorious for turning it on in the playoffs but also notorious for giving up a lot of goals in the regular season.

Second, it’s important to spell out where these breakdowns are happening and why. A goalie who is stopping incrementally fewer shots each season is of explicit concern. But this is where “buy low” opportunities can manifest, particularly if you think weakness in the player’s performance numbers is explainable.

That’s part of what’s happening here with Georgiev. Whereas Georgiev has floated around league average stop rates at even strength for a few years now, his numbers on the penalty kill have absolutely tanked this season. On a base of just 64 shots faced, you are going to get wild volatility in both directions. In Georgiev’s case, to the downside:

The penalty-kill stop rate falling off a cliff is alarming, but what you must ask is whether 12 goals against on a base of 64 shots is indicative of his true talent, or randomness undercutting his broader capabilities.

A better understanding of Georgiev’s capabilities encapsulates the entirety of his career, the good parts and bad alike, and puts him in the muddied middle of NHL goaltenders. With one exception: 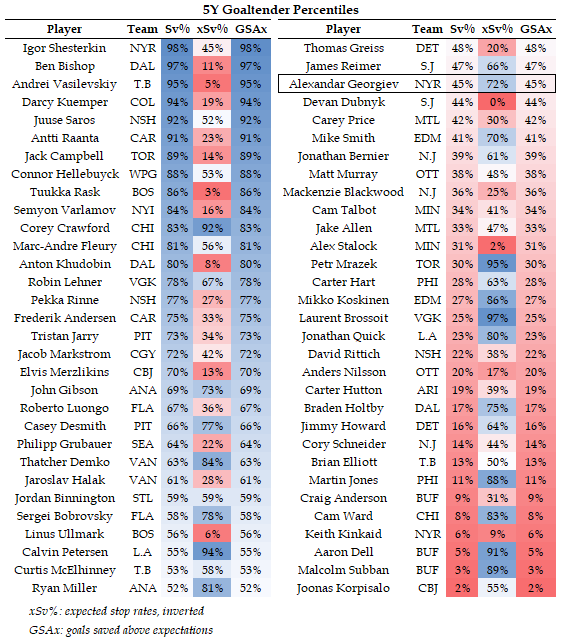 And there is one interesting data point in his favour, a data point Rangers fans have watched for years: The average shot faced by a Rangers goaltender, including Georgiev, is much more difficult than normal.

That’s why Georgiev’s expected save percentage grade (inverted) is quite high, and a clear differentiator between him and the rest of the players in his stratosphere.

Georgiev offers an intriguing opportunity for a team in need of long-term goaltending help. He will be an inexpensive extension, in large part due to this season’s performance. But we cannot lose sight of what we understand the player to be: one very capable of stopping shots, one on the fringes of becoming an NHL starter, and one who has faced a rather difficult start to his professional career.

He may not be Shesterkin, but few are. For teams looking to buy on potential upside, Georgiev seems like a quality candidate. It’s something I expect the Canadiens to consider at the upcoming trade deadline, and if unmoved, again during the off-season.