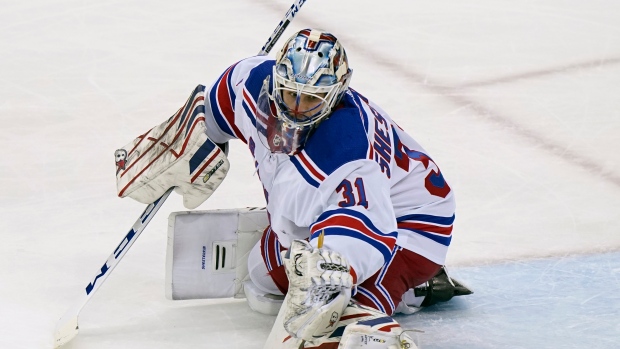 NEWARK, N.J. — Igor Shesterkin made 27 saves for his first NHL shutout and the New York Rangers opened a four-game series against the rival New Jersey Devils with a 3-0 victory on Tuesday night.

Mika Zibanejad and Artemi Panarin scored and Adam Fox had assists on both goals as New York improved to 10-4-3 since March 13. Pavel Buchnevich scored into an empty net with 28 seconds to play for the 20,000th goal in Rangers' franchise history.

“It was a big game. we still have meaningful games to play here and we want to continue to play those games,” Zibanejad said of the Rangers' playoff hopes. “Great opportunity today and I thought Igor played great, kept us in the game, and we found a way to come out in the third and play a lot better and got the win.”

Mackenzie Blackwood had 17 saves as the young Devils fell to 2-7-2 in their last 11. Even the return of captain Nico Hischier from a broken nose that had sidelined him since Feb. 27 didn't help.

The 25-year-old Shesterkin was on his game from the start, stopping a breakaway by Jesper Bratt in the opening 10 seconds and another by Devils top goal-scorer Miles Wood in the second period.

After the game was over, Shesterkin looked up to rafters at the Prudential Center in relief.

“It obviously means a lot," he said through a translator of the shutout. “And I want to thank all the players who played in front of me and blocked shots, all game, especially at the end when it was so meaningful to me to get this win and the shutout, and they did it for me and I’m thankful.”

Zibanejad, who has 12 goals in his last 15 games scored on a breakaway at 7:02 of a wide-open first period. The speedy centre took a pass in centre-ice, blew past the defence and beat Blackwood with a forehand over his glove hand.

After a very defensive middle period, Panarin gave the Rangers breathing room at 7:50 of the third with a goal from the left circle off a nice cross-ice pass by Filip Chytil.

Panarin's goal came in his 100th game with the Rangers. It also gave him 138 points in those games, breaking the 100-game mark of 137 set by Mark Messier.

“He’s a special player,” Rangers coach David Quinn said. “Everybody watched it and at key times, he makes key plays. There are not a lot of players in this league that can do what he does.”

The teams will play again on Thursday and Saturday in New York and return to New Jersey on Sunday for the final game of their eight-game regular-season series. The Rangers lead the series 3-2, having won the last three in New Jersey.

“If you don’t score goals, you can’t win a game," Hischier said. “We got into our heads during a game. We had some opportunities and goalie played well. But at the end of the day we got to get guys there and we've got to get pucks there and try to get one of those dirty goals. We were close a couple of times. Obviously, it’s frustrating to not get one in.”

Defenceman Jonas Siegenthaler made his debut for the Devils. He was acquired on Sunday in a deal with Washington. The Swiss native was paired with Will Butcher and played 15:45.

Just days after helping the University of Massachusetts win the national championship, defenceman Zac Jones signed an entry-level contract with the Rangers. The 20-year-old had nine goals and 15 assists in 29 games.

Rangers coach David Quinn said Jones drove to New York and will skate with the team until ready to play.

NOTES: It didn't take long for the emotions to surface. Chris Kreider of the Rangers and Damon Severson of the Devils got fighting majors at 1:27. ... Rangers defenceman Brendan Smith and Devils centre Michael McLeod got five for fighting in the second period. ... The Rangers did not have a power play. ... Hischier wore a cage to protect his surgically repaired nose.