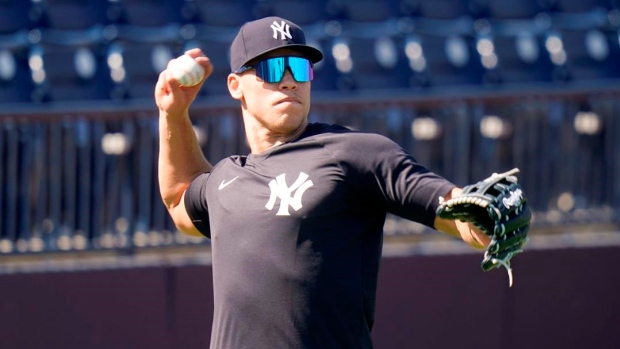 TAMPA, Fla. — Yankees slugger Aaron Judge is looking to another stretch of solitary confinement after this year's post-season.

On the day of New York's first full-squad spring training workout. Judge talked about the experience of playoff elimination for four straight years. He just wants to disappear.

“I usually don’t talk to too many people for a couple weeks after the season is over with,” Judge said after Tuesday. “That’s where I kind of decompress, get away from things, don’t even think about baseball. I don’t even want to see it on TV.”

The Yankees have not won the World Series since 2009.

But as the end of the year calendar approaches, Judge realizes it's time to look ahead. He started breaking down video of old games.

“Different things I look for to see where can I improve,” Judge said. “What can I do to help this team. I trust all of my teammates to do their job. Now it’s all about accountability, making sure I can step up and do my job. Last year is last year. Time to start looking forward to the new year and new team, and the things to do.”

The past weighs on Judge.

“But those are just scars,” Judge said. “I have scars all over me from past losses, past experiences but all it’s doing is making us stronger. So I just try to build off those experiences, what worked, what didn’t work. It’s all going to make it sweeter in the end.”

The two-time All-Star had his third straight injury-interrupted season since winning the 2017 AL Rookie of the Year award, hitting .257 with nine homers and 22 RBIs in 101 at-bats and 28 games. After homering in his first five games, he strained his right calf and played just once between Aug. 11 and Sept. 16.

There have been no talks between Judge and the Yankees on a long-term deal. He is eligible for free agency after the 2022 season.

“Our time is coming down the road,” Judge said. “It’s something I don’t really want focus on right now. I’m focused on trying to win, and that’s it.”

Notes: RHP Domingo Germán talked with teammates in a pair of meetings about his domestic violence suspension that kept him off the mound since September 2019. “I thought it was impactful, I hope, and I believe that," Yankees manager Aaron Boone said. “It was a good step. It gave everyone a chance to really start that conversion. The proof is to going to be in what's ahead and how he is as a teammate and how he is in life in general. I would say it was a good day." The 28-year-old right-hander missed the final nine games of the 2019 regular season and all nine of New York’s post-season games. He was suspended for 81 games on Jan. 2 last year, a ban that had 63 games left and cost him the entire 2020 season and playoffs.