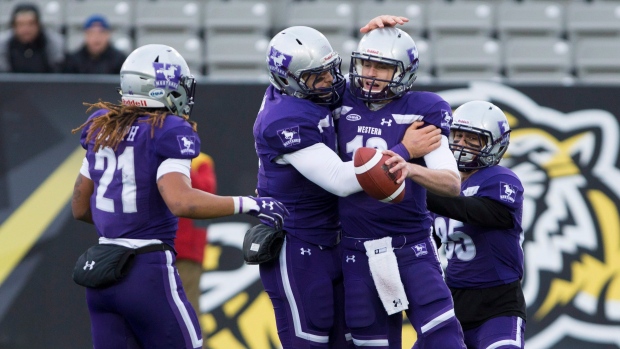 HAMILTON — The powerful Western Mustangs have been relentless throughout their undefeated season.

Not even the top-ranked defence in the country could come close to slowing them down.

Western quarterback Chris Merchant threw for 276 yards and ran for two touchdowns himself as the Mustangs defeated the Laval Rouge et Or 39-17 on Saturday to win the Vanier Cup.

"No one can really stop our offence," said Western defensive back Alex Salytchev. "Our defence flies around. We're truly the best team in the country.

"I hope everyone knows that this team will be immortalized as one of the best in history."

Receiver Cole Majoros had the other touchdown for Western on a breezy, overcast afternoon at Tim Hortons Field. Alex Taylor had 154 rushing yards on 26 carries as the Mustangs put up 578 total offensive yards.

Laval, the 2016 champion, gave up an average of just 9.6 points per game in the regular season.

But Western's top-ranked offence was brimming with confidence after piling up 222 points over its first three playoff games.

The Mustangs scored on their opening drive and never allowed Laval to gain any real traction.

"It was just too much of a good football team," said Rouge et Or head coach Glen Constantin. "We hit a buzzsaw."

Merchant mixed things up nicely from the start, finding Joseph on a screen for a 17-yard gain and moving into the red zone with a 28-yard pass to Majoros. The game MVP called his own number for a 13-yard TD run at 11:28.

Laval quarterback Hugo Richard was held to just 13 passing yards in the opening quarter. The Rouge et Or finished the game with 277 total offensive yards.

"I think they pure and simply outplayed us," Richard said.

Western padded its lead at 9:11 of the second when Joseph ran for a 12-yard score. It was his fourth run of an 82-yard, nine-play drive.

Late in the quarter, Western defensive back Jesse McNair was tagged with a 15-yard penalty after levelling Laval's Marc-Antoine Pivin with a dangerous tackle. The Rouge et Or scored two plays later as Richard found Benoit Gagnon-Brousseau for a 28-yard TD pass with 2:14 left.

The Mustangs answered with a 52-yard pass to Harry McMaster and Merchant added a 15-yard run to move into good field-goal position. Marc Liegghio was wide with a 27-yard attempt and Western settled for a single and a 16-7 halftime lead.

Liegghio delivered a strong kickoff to open the third quarter, pinning Laval deep in its own zone.

Western got the ball back around midfield and Merchant found Majoros for a 32-yard reception to set up Joseph's six-yard rushing TD. Laval conceded a safety moments later to extend the Mustangs' lead to 25-7.

The Rouge et Or had a glorious chance late in the third quarter but Henry Chadrick dropped a pass in the end zone. Laval's David Cote split the uprights from 34 yards out with 1:53 left.

Majoros scored on a 32-yard reception on Western's first drive of the fourth quarter to put the game out of reach.

"We focused on what we were good at and what we thought they were going to do, and we took advantage of it," Merchant said.

The Mustangs QB padded the lead with a 10-yard TD run with 7:08 left to the delight of the boisterous, vocal section of Western fans in the crowd of 10,754.

"This is a dominant team," said Mustangs head coach Greg Marshall. "To go undefeated and dominate the way we did in the playoffs, I'm really proud of these guys."

Laval's Vincent Alarie-Tardif rushed in from one yard out with seven seconds remaining.

Western fell to Laval in its last Vanier Cup appearance in 2008. Constantin guided the Rouge et Or to a 44-21 victory that day in Hamilton.

Western entered this year's title game on a high after an 81-3 whitewash of Acadia a week earlier. Laval (10-2), meanwhile, was pushed hard in a 35-23 win over Calgary.

The Mustangs outworked the Rouge et Or at the line of scrimmage and brought an intensity that Laval simply couldn't match.

"It's a championship game, we had to expect that and we did," Richard said. "But we didn't respond to it as well as we should have."

This was the seventh Vanier Cup win for Western. The Rouge et Or lead all Canadian universities with nine titles.

It was Marshall's first Vanier Cup victory as a head coach. He won twice as a Mustangs assistant coach (1989, '94).

Constantin has won eight titles as a head coach and one as an assistant.