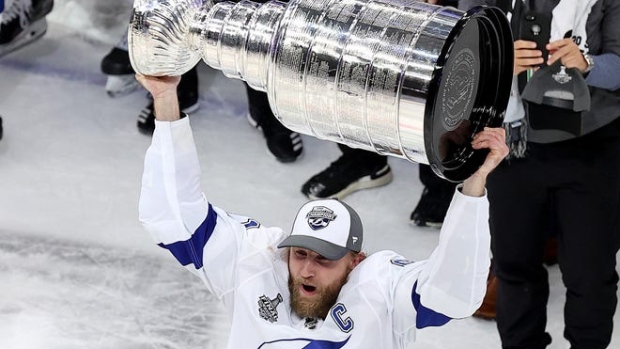 Follow all the latest news and updates as the 2020 NHL Draft draws near.

2:43pm et - Oliver Ekman-Larsson's agent Kevin Epp tells TSN Radio 1040 Vancouver that his client signed with Arizona to be there for his career but acknowledges that things change when a new owner/management team comes in and it wasn't their decision to sign him to the long-term deal.

Epp said they have set a Friday deadline for a trade to either the Boston Bruins or Vancouver Canucks in order to ensure the possibility of being traded doesn't linger into the off-season.

Kevin Epp, agent to Oliver Ekman-Larsson & Jake Virtanen, says OEL signed in Phoenix/Arizona to be there for his career but things change when a new owner/management team comes in & it wasn't their decision to sign him to the long-term deal. Kevin also says they expect a qualifying offer from the Canucks for Jake Virtanen today.

Epp, who also represents Jake Virtanen, said the forward had yet to receive a qualifying offer from the Vancouver Canucks, but one was expected before Wednesday's deadline.

1:22pm et - How surprising is it that Steven Stamkos isn't considered an untouchable for the Lightning as they try and clear up cap space? Which Tampa Bay players are likely on the way out after their Cup win? Who are the frontrunners to take Marc-Andre Fleury off the Golden Knights' hands? Could a Canadian team land Wayne Simmonds? The Insiders discuss this and more in the latest edition of Insider Trading:

12:39pm et - According to TSN Senior Hockey Reporter Frank Seravalli, the Rangers have received plenty calls on the No. 1 overall pick, including an overture from the Los Angeles Kings to swap the top two picks.

The Rangers, according to Seravalli however, have "zero intention" of moving the pick.

Sounds like there have been plenty of calls to #NYR GM Jeff Gorton about availability of the No. 1 overall pick over last two months - including a (recent?) overture from #LAKings to swap No. 1 and No. 2.

Alas, we are told #NYR have zero intention of trading No. 1.#NHLDraft

12:33pm et- What would it take for the Jets to trade away Patrik Laine? What team has been the most engaged in trade talks with Winnipeg? Darren Dreger, Pierre LeBrun and Frank Seravalli have more on that, the status of Taylor Hall and more in special midday edition of Insider Trading:

12:15pm et- Oliver Ekman-Larsson's camp has given the Arizona Coyotes a Friday deadline to trade the defenceman to either the Vancouver Canucks or Boston Bruins, otherwise he will remain with the franchise.

“We think the best option for a trade is before free agency,” Ekman-Larsson's agent Kevin Epp told TSN Hockey Insider Darren Dreger. “If no deal by Friday, Oliver is staying in Arizona.”

Oliver Ekman-Larsson through his agent, Kevin Epp has imposed a Friday deadline for a trade to either Boston or Vancouver. “We think the best option for a trade is before free agency,” Epp told TSN. “If no deal by Friday, Oliver is staying in Arizona.”

Ekman-Larsson, who has a full no-move clause as part of the eight-year, $66 million extension he signed in 2018, has told the Coyotes he would only waive for one of those two teams.

12:02pm et - A pair of once-promising NHLers are about to be bought out.

The Montreal Canadiens announced Tuesday that defenceman Karl Alzner is being placed on unconditional waivers for the purpose of buying out the remaining two years of his contract.

Canadiens place Karl Alzner on unconditional waivers for the purpose of buying out the remaining two years of his contract.https://t.co/2olSmZqbct

After a successful eight-year stint with the Washington Capitals, Alzner signed a five-year, $23.125 million deal but appeared in just 95 games with the Habs over three seasons, recording a total of 13 points.

Meanwhile, the Detroit Red Wings also announced they are buying out left winger Justin Abdelkader. He signed a seven-year, $29.75 million deal prior to the 2016-17 season and had three years remaining on that contract as of the buyout. He scored a total of 26 goals in the four seasons following his seven-year deal.

Update: Forward Justin Abdelkader has been placed on unconditional waivers for the purpose of a buyout.

10:01am et - TSN Senior Hockey Reporter Frank Seravalli tweets that the "sense is" the Columbus Blue Jackets are heading towards a buyout with centre  Alex Wennberg with no takers on the trade front.

Wennberg, 26, is signed through the 2022-23 season at a $4.9 million cap hit. Seravalli notes a buyout would save Columbus $10.7 million in real cash and result in clearing $4.46 million in cap space in each of the next three seasons. A buyout would, however, add a cap charge of $891,661 to the Blue Jackets cap in the following three years.

First #NHL buyout window closes Thurs. at 5pm ET. With no trade takers yet, sense is #CBJ are heading toward buyout with Alex Wennberg. Question is when?

Wennberg buyout would not only save $10.7 million in real cash, but also make for $4.46 million in cap savings for next 3 yrs

Wennberg had five goals and 22 points in 57 games this past season, adding three goals and five points in 10 games during the Return to Play.

9:33am et - TSN Hockey Insider Darren Dreger reports forward Tyler Johnson has given the Tampa Bay Lightning " several teams to work with in the quest for trade." He adds the list includes a mix of teams league wide.

Tyler Johnson has given the Tampa Bay Lightning several teams to work with in the quest for trade. Sources say the list includes a mix of teams league wide. Good communication between Lightning GM, Julien BriseBois and the Johnson camp.

Johnson has a full no-trade clause for the remainder of his four-year contract, which carries a salary cap hit of $5 million per season.

which would feed into the narrative Leafs GM Kyle Dubas talked about Monday with local media regarding his desire to add players who would make his team harder to play against...

The Maple Leafs extended centre Jason Spezza on a one-year, $700,000 contract on Monday, leaving the team with $4.7 million in projected cap space, per CapFriendly.

LeBrun notes the Montreal Canadiens showed interest in Simmonds last summer before he signed with the New Jersey Devils and could potentially circle back at a lower price this year.

Montreal showed interest in Simmonds last July but wasn't ready to pay what NJ did ($5M aav). It wouldn't surprise me if Habs circled back on Simmonds again at least to see. (bottom six role?). Simmonds told me last month it's the best he's felt physically in 2 yrs

8:05am et- TSN Hockey Insider Darren Dreger reports the Winnipeg Jets have had "multiple discussions with a number of clubs" on winger Patrik Laine and others, but have not found a fit to date.

Dreger notes that the Jets are not simply trying to sell off assets, but trying to fill rolls on their roster at centre and on the blueline. Whether Laine is involved when the team accomplishes that remains unknown.

TSN Senior Hockey Reporter Frank Seravalli adds the Philadelphia Flyers were believed to be the most engaged team in talks with the Jets on Laine, but talks have cooled for now. Seravalli notes the talks did include a defenceman from the Flyers, and Matt Niskanen's decision to retire on Monday should not impact the Flyers ability to revisit the deal.

Believe the #Flyers were the team most engaged with #nhljets to this point on Laine. Talks have cooled for now. Though it did involve a defenceman going to WPG, the Niskanen retirement is a nonfactor in PHI’s ability to revisit a potential Laine deal. Will they? We’ll see. https://t.co/jjqWMc0cxc

Though Niskanen's retirement freed $5.75 million in cap space for the Flyers, Seravalli reports Philadelphia does not appear to be interested in joining in the Alex Pietrangelo sweepstakes.

Speaking of Niskanen: All the best to Matt on a fantastic 13-year career and #StanleyCup

His recently freed up $5.75 million should not be seen as making #Flyers an entrant in the Alex Pietrangelo sweepstakes. PHI does not appear to be interested in the pending UFA.

7:32am et - The Oliver Ekman-Larsson trade watch continues on draft day, but it appears his list has not grown in size over the past week.

TSN Hockey Insider Darren Dreger reports there was a "good amount of internal discussions" between the Coyotes and Ekman-Larsson's camp on Monday, but no deal remains in place with either the Vancouver Canucks or Boston Bruins.

Ekman-Larsson, who has a full no-move clause as part of the eight-year, $66 million extension he signed in 2018, has told the Coyotes he would only waive for one of those two teams.

TSN Hockey Insider Pierre LeBrun reports that other teams have tried to enter the sweepstakes, but the Coyotes captain has stayed true to his initial two-team list so far.

Other teams have tried to get in on this process but so far OEL has stayed true to his two-team list. Let's see if that changes or not. https://t.co/E2gGW9jRhF

The Coyotes are currently without a pick in the first three rounds of this year's draft.

McKenzie reports the Lightning have been aggressive in informing other teams they plan to be aggressive in offloading contracts to clear cap space. He's been told the Lightning consider four players from the Stanley Cup championship team untouchable: Andrei Vasilevskiy, Victor Hedman, Brayden Point, and Nikita Kucherov. He adds that restricted free agents Anthony Cirelli, Mikhail Sergachev and Erik Cernak are likely untouchable as well.

McKenzie points out that captain Steven Stamkos, who missed all but one game during the Return to Play, is not on that list.

"That doesn’t guarantee Stamkos will be dealt but it’s within realm of possibility though his health could obviously be a factor," McKenzie wrote Tuesday morning.

Cup champs TB have let it be known to other teams they aim to be aggressive in offloading 💰. How aggressive? Hearing teams have been told only four Bolts are unavailable/untouchable: Vasilevskiy; Hedman; Point; Kucherov. Presumably, RFAs Cirelli, Sergachev and Cernak, too.

The point is multiple bodies may need to go. Stamkos may or may not end up being one of them, but he doesn’t appear to be exempt from that consideration, as Vasilevskiy, Hedman, Kucherov and Point are. Complicating things is so many teams trying to shed 💰. Interesting week.

Moving on, McKenzie reports the St. Louis Blues could still make one final push to try to re-sign Alex Pietrangelo before he hits the open market on market on Friday. Pietrangelo is currently TSN's top ranked free agent.

As @DarrenDreger reported Monday, ARI is shopping Taylor Hall’s UFA rights. We’re also waiting to see if STL makes one final effort to re-sign captain Alex Pietrangelo before he is scheduled to go to the open market at noon ET on Friday.

On Lundqvist, McKenzie notes the 38-year-old cannot formalize an agreement on a new contract until Friday despite having been bought out by the New York Rangers. He points to the Washington Capitals being the "clear frontrunner" to land Lundqvist on a what would likely be a short-term contract.

Although bought-out ex-NYR goalie Henrik Lundqvist is currently UFA, he cannot formalize an agreement until Friday. That said, the word on the street is that WSH is the clear frontrunner for the King’s services on what would presumably be a short-term, bargain contract.

That would make sense both ways. WSH would get capable vet on affordable deal to platoon/push burgeoning No. 1 Ilya Samsonov, who’s only 23. Lundqvist would get good chance to play decent number of games on a team with a chance to contend. And in the Metro Division, no less. 😉