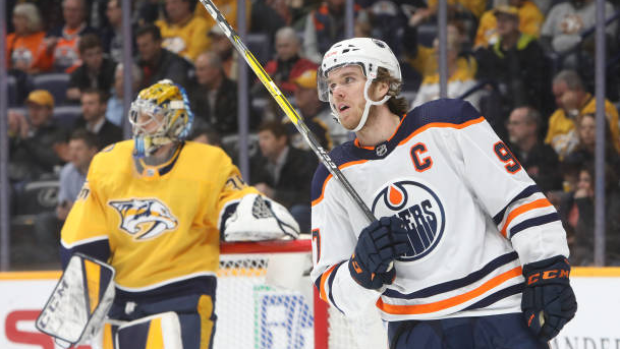 The NHL and NHLPA have finalized a tentative agreement on Phases 3 and 4 of the league's Return-To-Play protocols, but are still working on finalizing the details of the collective bargaining agreement memorandum of understanding, according to TSN Hockey Insider Bob McKenzie.

McKenzie reports that negotiations to finalize a tentative CBA extension are not expected to be concluded by Sunday night and that the process will continue on Monday.

The NHL-NHLPA negotiations to finalize a CBA extension and Memo of Understanding are not expected to be concluded with a tentative agreement this evening. The process will resume on Monday.

Both the Return-To-Play protocols and CBA will need to be ratified by the NHLPA executive committee followed by a full membership vote. However, no ratification will take place until the CBA MOU is finalized. It will also require ratification by the NHL Board of Governors.

The entire package — RTP and CBA — will need to be ratified by NHLPA executive committee and then a full membership vote but no ratification will take place until the CBA MOU is complete. Also will require ratification by NHL Board of Governors.

It’s not likely full NHLPA membership vote could start before Wednesday but no decision on that has been made yet. While many have speculated once membership starts voting, it’s a 72-hour process to conclude, but I’m told vote duration is still TBD. Could be shorter than 72.

In order for NHLPA membership to ratify, it would require a simple majority. The NHL B of G ratification process is not as arduous because: a) it can happen in one conference call; and b) the governors rarely, if ever, reject an agreement endorsed by commissioner Gary Bettman.

If the CBA MOU gets tentatively agreed upon and ratified this week, McKenzie says training camps could start on July 13 with teams reporting to the hub cities of Edmonton and Toronto sometime around July 26. Games could start on Aug 1.

McKenzie notes some of the details in the Return-To-Play agreement include a limit of 30 skaters and unlimited goalies in Phase 3 training camps. Only players that are eligible to play in the season resumption are allowed to skate in Phase 3.

Players can opt out without penalty, but will need to make their decision three days after the ratification vote is complete.

For any player wishing to opt out (penalty free) of Phase 3/4, the deadline for the player notifying his club in writing is three days after the ratification vote is complete.

Teams must submit their list of participating players by July 9. Furthermore, McKenzie reports there is a detailed breakdown of quarantine requirements regarding players returning to their home cities.

The deadlines are subject to change.

COVID-19 testing protocols are also included in the document, says McKenzie. Players and club personnel will be tested 48 hours prior to any individual returning to training facilities and every other day following. Results are expected to be available within 24 hours. If the results are not available in 24 hours, the player or staff member won't be able to remain in club training facilities until they get a negative test result. There will also be daily temperature and symptom checks for individuals at home and upon entry to the training facility.

If any player tests positive for the coronavirus they will be deemed "unfit to play" and will be treated as a hockey-related injury for all purposes under the CBA, says McKenzie.

See McKenzie's tweets below for more details on testing and COVID-19 protocols.

If the test result is unavailable within the 24-hour period, the individual is not permitted to remain in club training facilities until such time that the test comes back negative.

All players who haven’t already had it as part of Phase 2 will undergo a Pre-Participation Medical Examination (PPME) prior to any Phase 3 activities but after any required quarantine period has been served.

...shall be deemed to be unfit to play and shall not be permitted to participate in either Phase 3 or Phase 4. A player may initiate a second opinion concerning his fitness to play status pursuant to Paragraph 5 of the Standard Player Contract.”

If a player develops symptoms, or anyone in the player’s household, he shall immediately notify the club medical staff, self-isolate and, if deemed appropriate, go through testing protocols.

Any player who tests positive for COVID-19 or has a resulting or related illness will be deemed “unfit to play” and it will be an illness arising out of his employment as a hockey player and treated as a hockey-related injury for all purposes under the CBA.

Players participating in Phase 3 are not permitted to work out or skate at any public facility. No fitness testing of players by clubs will be permitted during Phase 3. Permitted Phase 3 activities include all on/off-ice sessions with coaches, traditional training camp activities

Teams across the league are currently training in small groups as part of Phase 2. Phase 3 will feature training camps while the actual games will be played during Phase 4 in hub cities Toronto and Edmonton.

On Saturday, TSN's Frank Seravalli laid out some details on the expected CBA agreement between the NHL and NHLPA.

Here is a rundown of the pertinent particulars:

The Alexis Lafreniere Draft Lottery sweepstakes will be held on Aug. 10, with the NHL Draft to follow in mid-October. Free agency would take place in the fall for the first time in league history on Nov. 1.

> Opt-out: Any player can opt-out of Return to Play this summer for any reason and there is no penalty or discipline for doing so. There was originally talk that a player opting out for anything other than an underlying medical condition would not be eligible for a playoff share and would not receive the final quarterly pension credit for the season.

> Playoff share: The playoff bonus pool is doubling this season from $16 million to $32 million. A player on a team that loses in the best-of-five qualifying round will receive $20,000. Players in each round will see bonuses increase from there, with a share from the Stanley Cup winning team worth $240,000 per player.

> Term: The new CBA will have a term of six years, ensuring labour peace through at least 2025-26. It can also be extended one year if the escrow debt from 2019-20 owing to owners exceeds $125 million at the end of the deal.

> Final paycheque: The players’ final paycheque from the 2019-20 regular season season, which had been deferred until this point, will go to repaying their debt to owners. That totalled roughly $140 million USD.

> Outlawing front loaded deals: For high-value, front loaded long-term deals (at least 6 years, worth at least 7.5 per cent of cap), salary variability from the highest year to the lowest year will go from 50 per cent down to 35 per cent.

> Rehab choice: Players will now be able to rehab long-term injuries in a place or city of choice unless their team can prove that rehab will not be possible there.

> No European Waivers: We should call this the Ryan O’Reilly Rule. Players who play in Europe will no longer require waivers to come back to the NHL, provided they sign their NHL contract by Dec. 15. Previously, if a player played in Europe after the start of the regular season, waivers were required. The Flames signed O’Reilly to an offer sheet in 2013 during the lockout while he was holding out from Colorado in the KHL; if the Avalanche had not matched, he would have been subjected to waivers and the Flames likely would have lost him.