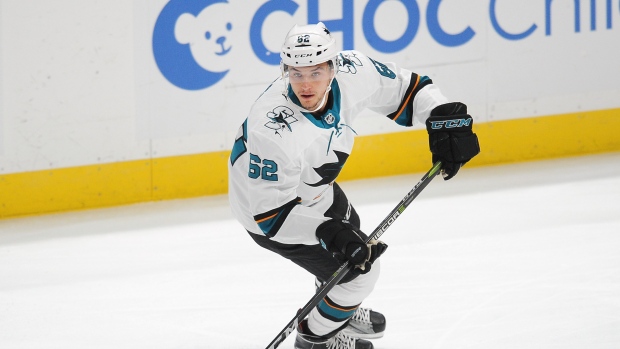 Ready to wheel and deal?

After making the Stanley Cup Playoffs in 14 out of 15 years between 2004 and 2019, the San Jose Sharks have been on the outside looking in two seasons in a row. According to The Athletic's Kevin Kurz, changes might be on the way.

Kurz wrote the Sharks are "ramping up trade discussions with teams" and have dangled Kevin Labanc, Radim Simek and Dylan Gambrell as potential trade bait.

Kurz adds that general manager Doug Wilson would like to make a deal involving established players at the NHL level but is also hoping to gain more picks in the NHL Draft, which will be held July 23 and 24. Kurz notes the Sharks are also believed to be looking for goaltending and a third-line centre.

Labanc, 25, posted 12 goals and 16 assists in 55 games last season, his fifth with the Sharks after being selected in the sixth round of the 2014 NHL Draft. He has three seasons remaining on a four-year, $18.9 million he signed in October of last year that carries a cap hit of $4.725 million.

Simek, a 28-year-old defenceman, has five goals and 21 points in 129 games spread out over three seasons with the Sharks. He has three seasons left on a four-year deal he signed last year with a cap hit of $2.25 million.

Gambrell is a restricted free agent after completing a two-year, $1.4 million deal. The 24-year-old forward had five goals and seven assists in 49 games last season. Kurz notes the internal view is that Gambrell was overmatched as a thrird-line centre but could produce as a fourth-liner.

"We love Phil Danault. I think he even mentioned that we offered him a contract in September. He's still in the plans. The next few weeks will decide Phil's future, but we'd definitely like to keep him in Montreal," Bergevin said.

Danault is an unrestricted free agent this summer coming off a season where he posted five goals and 24 points in 53 games during the regular season, finishing sixth in Selke Trophy voting for the second straight year. He also had four points in 22 Stanley Cup Playoff games while playing an average of 18:93 per night.