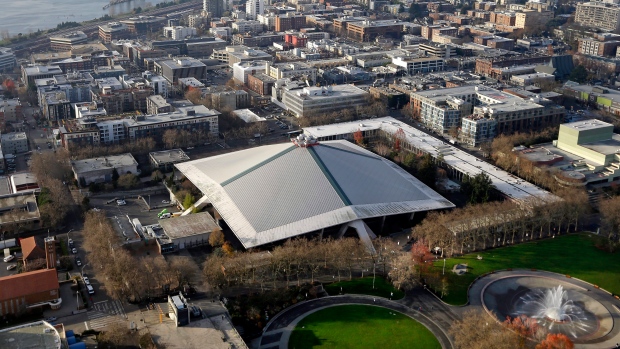 MANALAPAN, Fla. — The NHL is opening its doors to Seattle.

Commissioner Gary Bettman said Thursday the league's board of governors have agreed to consider an expansion application from billionaire David Bonderman and filmmaker Jerry Bruckheimer to bring a franchise to the city.

"We don't just say, 'It would be a good idea to expand, let's do that,'" Bettman told reporters assembled at the posh Eau Palm Beach Resort & Spa. "We do our homework, we evaluate it, we examine all of the aspects.

"Expansion is a very, very important business decision, and you want to get it right."

"We're a little familiar with the city, but the level of due diligence that we will do is something the expansion process contemplates," he said. "From everything I know viscerally, I think it will be a good market ... I think the rivalry with Vancouver as a potential would be nice.

"It's an intriguing possibility, but we've got homework to do."

Seattle plans to have the aging KeyArena renovated by 2020 with the goal of luring an NHL or NBA team.

"Evaluating the market, the arena, the ownership, the impact on the league is something that we'll go through," said Bettman. "The board will ultimately make a decision."

Bettman added Seattle is the only market being considered for expansion at the moment, which means an NHL team won't be playing in Quebec City's Videotron Centre in the foreseeable future.

The league deferred its decision on Quebec City's expansion bid when awarding a franchise to Las Vegas. The Nordiques left town for Colorado in 1995.

"I don't think today's events have any impact on Quebec City," said deputy commissioner Bill Daly. "If I wanted to be positive, I'd say one of the things we kept harping on is we need another team in the (Western Conference) before we consider expanding in the East.

"If Seattle submits an expansion application and is approved by the board, then you have your other team in the West and you've solved your balance issue."

Las Vegas was permitted to start a ticket drive in December 2014 before allowing prospective owner Bill Foley to apply for an expansion franchise six months later, meaning that the process has been sped up for the Seattle group.

Bettman added relocation of an existing team could also be an option, but not one the league is considering at the moment.

Seattle Mayor Jenny Durkan on Wednesday signed an agreement with a developer to renovate KeyArena after city council approved a memorandum of understanding with Los Angeles-based Oak View Group to privately finance a roughly US$600-million remodel of the venue earlier this week.

KeyArena housed the NBA's SuperSonics until they relocated to Oklahoma City ahead of the 2008-09 season.

The Oak View Group, which has pegged Bonderman and Bruckheimer as the lead owners for a potential NHL franchise, is run by CEO Tim Leiweke, who previously headed Maple Leaf Sports and Entertainment.

Seattle is the No. 14 media market in the United States and the only one in the top 25 without an NBA or NHL team.

Also at Thursday's board of governors meeting, Dallas billionaire Tom Dundon signed an agreement to purchase a majority stake in the Carolina Hurricanes from Peter Karmanos Jr.

"Pete and I built a relationship," Dundon said Thursday morning after meeting with the board's executive committee. "We want to work together."

Karmanos would maintain a minority stake under the proposal, which the NHL still has to OK. Bettman said that process should be completed in the next month.

Dundon and Karmanos plan to keep the Hurricanes in Raleigh, N.C., despite the former's ties to Texas and the fact the Houston market would be attractive to the NHL.

"We like (the team) where it is," said Dundon, 46, who has to sign a standard consent agreement that bars him from moving the team for at least seven years.

Bettman, who added the Arizona Coyotes continue to work towards a new arena, was emphatic in his remarks that the Hurricanes will be staying in Raleigh.

"Tom Dundon is buying his interest in the Hurricanes to have the Hurricanes in Carolina," he said. "The rumours that it might be moving somewhere else are absolutely incorrect, made-up fabrications.

"Wrong, wrong, wrong. The club is not going anywhere with Mr. Dundon's purchase."

Karmanos said having a majority owner committed to Raleigh long-term was crucial.

"The league is not amenable to moving franchises at all."

-With files from the Associated Press

Note to readers: This is a corrected story. A previous version said a sale could be approved Thursday, instead of a purchase agreement.