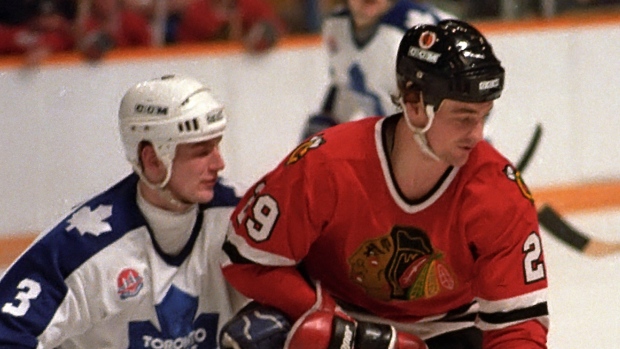 The National Hockey League wants its own medical team to examine Steve Ludzik and four other former players suing the league over its handling of concussed players.

In a motion filed late Monday in U.S. district court in Minnesota, the NHL asked a judge to order Ludzik, Mike Peluso, Dan LaCouture, Bernie Nicholls, and Gary Leeman to undergo extensive medical examinations. The two sides have been negotiating since the NHL sent its first request for medical exams on June 30, 2015.

The league points out in its court filing that Ludzik, 54, the former Chicago Blackhawks forward and NHL head coach, says he suffers from Parkinson’s disease, which slowly destroys brain cells, causing people with the condition to lose control of their bodies.

Ludzik, in particular, should be ordered to take a PET scan, which measures brain function, the NHL said. Ludzik “does claim to have a clinical diagnosis of parkinsonism. Thus, a PET scan is necessary and reasonable to test that diagnosis.”

Lawyers for the former players have agreed that a medical exam of Ludzik is appropriate but have opposed the NHL subjecting him to a PET scan, blood work, or psychiatric and neuropsychological exams.

The NHL is also entitled to confirm the existence of the other players’ alleged symptoms, the league says in its motion. The NHL is asking that Peluso, LaCouture, Nicholls and Leeman be subjected to blood work, and neuropsychological or psychiatric examinations.

While 105 players are now involved in the concussion lawsuit against the NHL, the five players involved in the debate over medical testing are proposed class representatives, meaning their symptoms are similar to other former NHL players of the same era. That would be important if the judge in the case agrees to declare the litigation a class action lawsuit.

In its motion filed Monday, the NHL noted that it has dropped its request for CT scans and spinal taps of players, which the former players had complained were too invasive.

“All that remains at this time for plaintiffs LaCouture, Peluso, Leeman and Nicholls are painless, minimally invasive and necessary tests that are routinely conducted in cases like this one, in which the plaintiffs allege neurological injury: blood work, MRI, and neurological, neuropsychological, and psychiatric testing,” the NHL says. “As to Mr. Ludzik, the NHL is seeking the same tests with the only difference being that the NHL submits he should also undergo a Fluorodopa PET scan."

That kind of PET scan helps differentiate diagnosis with respect to claims of parkinsonism, the NHL said.

The court documents filed Monday offer a window into the type of back-and-forth negotiations that take place in a high-stakes lawsuit such as the one the NHL is now battling.

The league’s motion is the latest development in a lawsuit that already is into its third year. In 2014, a group of players sued the NHL alleging that the league has put profits ahead of their long-term health. Too often, players allege, team doctors advised players to return to the ice before their symptoms from head trauma had subsided.

A 14-year study of concussions by the NHL, the players charge, was a whitewash that failed to change the mindset of many of the NHL’s team and league officials.

The NHL alleges the players are being led by cash-hungry lawyers who watched the NFL settle a similar case with former players for more than $1 billion. The lawyers, the NHL alleges, are anxious for their own pay day and have coaxed the players to file a lawsuit without merit. Players could have done their own homework about concussions and brain injuries and put “two and two together,” the league said.

The NHL’s doctor, Warren Olanow, a professor at the Mount Sinai School of Medicine in New York, wrote that genetic testing of Ludzik’s blood would help to determine whether his parkinsonism might be linked to genetic factors.

The NHL proposes another doctor, Marc Norman, a professor of psychiatry at the University of California, San Diego school of medicine, perform neuropsychological exams of some of the key plaintiffs, including collecting players’ extensive family and personal history and having them perform “a series of paper and pencil tests...”

Dr. Jennifer Finkel, an assistant professor of psychiatry and neurology at the Mount Sinai School of Medicine, has been retained by the NHL to conduct psychiatric exams on the five players.

On Feb. 9, 2016, lawyers for the former players informed the NHL that they believe, after consulting with their own expert, Boston University researcher Robert Cantu, that there is no “medical or legal” justification for conducting the medical exams with respect to players who have asked the court to order the NHL to provide them with medical monitoring because those players (Peluso, Leeman, LaCouture and Nicholls) “are not asserting claims based on a present illness.”

The former players also point out that the NHL has already obtained documents including the players’ workers compensation records, their medical records going back to when they were 15 years old, and will also have evidence obtained through their yet-to-be-taken depositions.