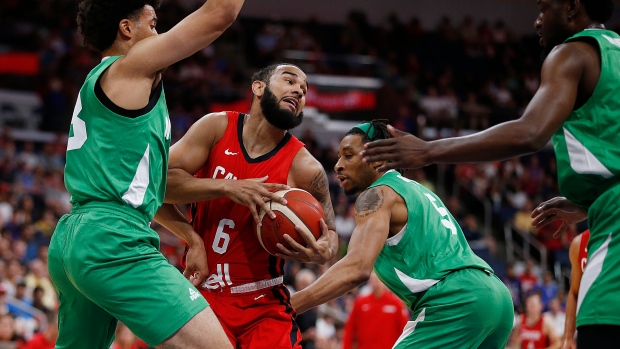 Team Canada head coach Nick Nurse said Wednesday that reports of Cory Joseph missing the FIBA World Cup are "incorrect" and that the NBA star has his flights booked to join the team in China.

Reports emerged Tuesday that Joseph would not play in the world cup after missing all three of the team's exhibition games in Australia. Nurse told Australian journalist John Casey on Wednesday, however, that those reports were not true.

.@CanBball coach Nick Nurse says reports that Cory Joseph will miss #FIBAWC are “incorrect”. He spoke with him today & he has flights booked to China #CanadaBasketball pic.twitter.com/HPD1eN2GCt

Joseph, who attended training camp with Canada, left the team ahead of its first exhibition game against Australia on Aug. 16, but was expected to return to the team before the tournament.

Joseph, who has a long history of playing with Canada, signed a three-year contract with the Sacramento Kings this off-season. Fellow NBA player Kelly Olynyk withdrew from playing with Canada after suffering a knee injury in one of Canada's earlier exhibitions games, and a host of other NBA players declined invitations to attend camp with Canada.

Jospeh is expected to be one of just two NBA players on Canada's roster along with Khem Birch of the Orlando Magic.

The FIBA World Cup starts on Aug. 31 in China. A top-seven finish at the tournament would give Canada a berth at the 2020 Tokyo Olympics, their first since 2000