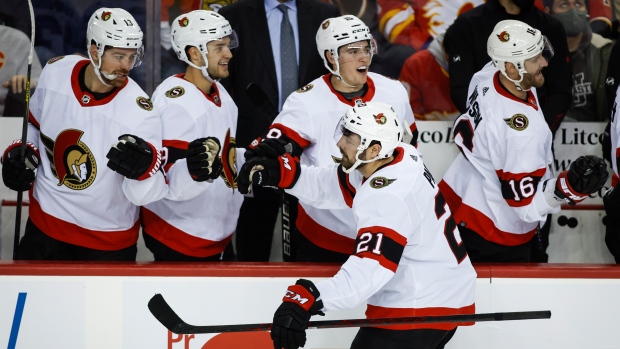 Nick Paul is heading to the Sunshine State.

The Ottawa Senators are dealing forward Nick Paul to the Tampa Bay Lightning for forward Mathieu Joseph and a fourth-round pick in 2024, it was announced Sunday evening.

Roster update: The #Sens have acquired forward Mathieu Joseph and a fourth-round draft pick in 2024 in a trade with @TBLightning in exchange for forward Nick Paul.

As part of the deal, the Sens will retain 44.5 per cent of Paul's remaining salary for 2021-22. The 27-year-old is set to become an unrestricted free agent this summer and carries a cap hit of $1.35 million for the season.

Paul has 11 goals and seven assists in 59 games so far this season for the Sens, his seventh with the team.

Paul was drafted by the organization in the fourth round (No. 101 overall) in the 2013 NHL Draft and made his NHL debut during the 2015-16 campaign.

Meanwhile, Joseph, 25, has eight goals and 10 assists in 58 games for the Bolts so far this season.

He is set to become a restricted free agent this summer and carries a cap hit of $737,000 for the season.

TSN Hockey Insider Pierre LeBrun tweets that Joseph's arbitration case this coming summer was going to be an issue for a cap-challenged Lightning team, meaning they likely would have had to qualify him and make him an unrestricted free agent.

Mathieu Joseph’s arb case this summer was going to be an issue for cap-challenged Tampa Bay. Probably would not have qualified him, making him UFA. So really in Tampa’s eyes, a pending UFA for a pending UFA.
Tampa also likes Nick Paul’s versatility.