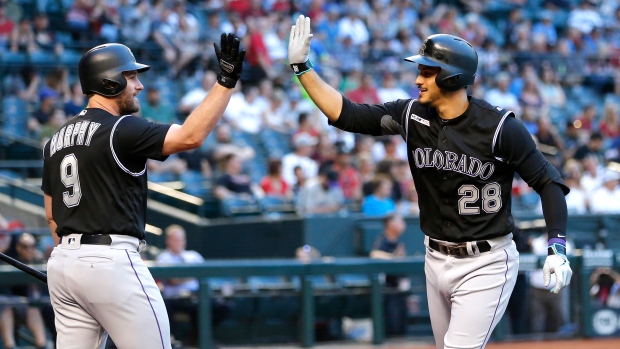 PHOENIX — The Colorado Rockies were in search of a return to some form of normalcy on the heels of a wild four-game split with the San Diego Padres in which they scored 48 runs and allowed 44.

Nolan Arenado, Charlie Blackmon and Antonio Senzatela helped give the Rockies exactly that.

Arenado homered and drove in three, Senzatela pitched one-run ball into the seventh inning and the Rockies beat the Arizona Diamondbacks 8-1 Tuesday night.

Blackmon stayed hot with three hits, though he admitted to feeling less than 100 per cent after the taxing San Diego series. The Rockies (39-35) took over second place in the NL West, a game up on the Diamondbacks, with their sixth straight win against Arizona.

"I feel like I'm doing a good job of not trying to do too much," Blackmon said. "My best approach is usually to see it, hit it."

Senzatela (6-5) equaled his longest outing of the season with 6 2/3 innings, allowing seven hits with five strikeouts and four walks.

"He was the key to game," Rockies manager Bud Black said of Senzatela. "'Senza' restored order. That was critical. This was in my opinion a big game."

The Rockies took a 2-0 lead on Arenado's high drive into the left field seats off Arizona's Merrill Kelly (7-7) with two out in the first. It scored Blackmon, who led off the game with a double down the right field line.

"I'm just glad he's on our team," Arenado said of Blackmon. "Our offence goes as he goes, I've always said that."

Blackmon has reached base in 28 consecutive games, the longest active streak in the National League. He was named NL Player of the Week on Monday after getting 21 hits last week, and he's the first player in Rockies history with at least three hits in five consecutive games.

Jarrod Dyson bunted over Senzatela's head for a base hit to lead off the fifth, took third on a single and scored on David Peralta's fielder's choice to make it 2-1. But the Rockies took control in the top of the sixth with four runs.

McMahon sprinted home on a wild pitch before the inning ended, giving the Rockies a 6-1 lead.

Ian Desmond's single in the fourth extended his hitting streak to 11 games. Desmond and Dahl drove in single runs in the seventh.

Kelly was charged with five earned runs and eight hits in six innings, striking out five. He had won his past three starts.

The Diamondbacks fell to 14-17 at home this season.

"I can't explain it," manager Torey Lovullo said. "I thought we were in a decent position. I thought we did a good enough job of it but that four-run sixth really took the wind of us."

Colorado called up infielder Pat Valaika from Triple-A Albuquerque and designated pitcher Mike Dunn for assignment. Dunn had been with the Rockies since 2017 and made 121 appearances. "It was emotional," Black said. "Mike understood all elements of the decision."

The Rockies got their 2,000 win as a franchise.

Tuesday tied for the third latest calendar date in Chase Field history that the stadium's retractable roof was opened for a game. The record is June 27, 1998. Temperature at first pitch was 103 degrees.

Diamondbacks: IF Jake Lamb was scheduled to play first base for Triple-A Reno on Tuesday night in San Antonio. He's been on the injured list since April 5 with a strained quadriceps.

Rockies: RHP Jon Gray (6-5, 4.39 earned run average) is set for his second start against Arizona this season Wednesday. He's 2-3 in eight career starts against the Diamondbacks with both wins at Chase Field.