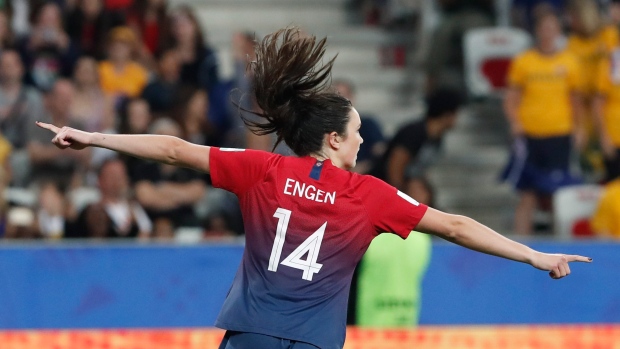 NICE, France — Ingrid Hjelmseth proved to be a shootout hero once again as Norway beat Australia on penalties Saturday night to advance to the quarterfinals of the Women's World Cup.

Hjelmseth saved Emily Gielnik's kick and Ingrid Engen, who is playing in her first World Cup, hit the decisive penalty as Norway won the shootout 4-1 after the match had finished 1-1.

Australia captain Sam Kerr, who was frustrated by Norway most of the night despite several opportunities, fired her penalty shot high and wide.

"It was a great win," Hjelmseth said. "I was just focusing and picking a side when they put the ball down. I was just telling myself, 'OK, I will go to the right,' and then I took a chance and it was good for us, it was the right side."

Hjelmseth saved two penalties in her last shootout — the semifinal of the 2013 European Championship.

"That was a good one," she said. "I think when you're a goalie you can only be a hero so it's just about picking a side and just finding the right timing to go so you don't get the VAR stuff."

Norway will face the winner of Sunday's game between England and Cameroon.

The shootout came after a game during which neither team had a clear advantage, though Norway succeeded in keeping Australia's Kerr from being much of factor. Kerr had a goal ruled out in the second half after offside was called. Australia also had two penalties denied on video review in normal time.

The game went to extra time after Australia's Elise Kellond-Knight scored from a corner to make it a 1-1 game in the 83rd minute.

Forward Isabell Herlovsen put Norway up 1-0 with a goal in the 31st.

Australia had to play the final 16 minutes of extra time at a numerical disadvantage after defender Alanna Kennedy was sent off on a red card for hauling down Norway forward Lisa-Marie Utland. Norway peppered Australia's goal but was repeatedly denied by goalkeeper Lydia Williams.

"It was tough," Kerr said. "A lot of the girls had already played a lot of minutes so we were already running on empty and then obviously Alanna getting sent off is not ideal but we stuck together. We were still confident and believing in each other but it just didn't come off tonight."

Kerr ended the tournament tied with American Alex Morgan for the most goals at five.

"Only big players can miss penalties, because small players don't take them," coach Ante Milicic said when asked what he told Kerr after the match.

Australia was thwarted in its attempt to reach the quarterfinals for a fourth straight time.

"This team had high expectations and goals coming into this tournament so to go out this way it was pretty rough and I haven't really wrapped my head around it I don't think," said defender Steph Catley, who had Australia's only successful penalty kick during the shootout. "Doesn't really feel like we're out if that makes sense. It's devastating."