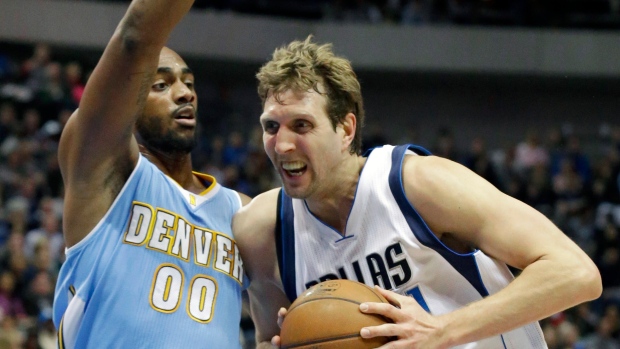 DALLAS - It sure appeared a night of rest did Dirk Nowitzki some good when he scored the first 10 Dallas points without missing a shot.

The 36-year-old forward didn't quite maintain that pace in his return to the lineup, but the early cushion was enough to keep the Mavericks ahead throughout in a quick rematch with Denver.

Nowitzki scored 25 points two days after sitting in the Mile High City, and the Mavericks split a home-and-home set against the Nuggets with a 97-89 victory Friday night.

"He looked good," said Chandler Parsons, whose 18 points included a thunderous dunk over J.J. Hickson. "He still got a little gassed out there. Obviously, I think not playing and resting and just getting some cardio in was beneficial for him."

Tyson Chandler and Rajon Rondo were the other two Dallas starters who sat out the second night of a back-to-back on Wednesday, and their return helped as well.

Chandler, who has been nursing a sore ankle, had his 17th double-double with 11 points and 16 rebounds.

Rondo, slowed by a mild Achilles issue, scored just two points but had eight assists and nine rebounds while helping hold Nuggets point guard Ty Lawson to 11 points after he scored 29 in the Denver win on Wednesday.

"The starting five was back together, and the good start kind of carried us through," said Nowitzki, who was 8 of 18 from the field, including 4 of 5 from 3-point range, with nine rebounds.

Arron Afflalo scored 16 to lead the Nuggets, who had to withstand a rally to beat the travel-weary and short-handed Mavericks at home after four nights off. Denver's five-game winning streak, tied for a season high, ended in the first of four games in five nights.

The Nuggets were outscored 10-2 to start the game and 11-2 coming out of halftime but stayed close throughout. Denver never led, though, and couldn't get closer than a six-point deficit to start the fourth quarter.

Free throws were partially to blame, with the Nuggets making just 12 of 25.

"The ball wasn't going in the rim either from the free throw or from the field," Lawson said after the Nuggets shot 37 per cent in the first half and 41 per cent for the game. "We got the shots we wanted. Nobody was forcing shots or anything. They just didn't fall."

Nuggets: Lawson didn't get his first field goal until banking in a 3-pointer late in the third quarter. He did have 12 assists, though. ... Hickson had 13 points and a season-high 14 rebounds.

Mavericks: Nowitzki moved into 22nd place on the career list for 3-pointers, passing Mike Bibby's total of 1,517. ... In their loss to Denver on Wednesday, the Mavericks had eight players in double figures for the third time this season, a first for the franchise.

Parsons' one-handed slam over Hickson brought his teammates off the bench in the third quarter after Wilson Chandler made a similar move on Tyson Chandler in the first half for Denver. Parsons later ended up near Nuggets coach Brian Shaw and Hickson during a break in the action.

"Coach Shaw was like, 'You're going to let him do that to you?'" Parsons said. "I was like, 'I'll sign the poster' and tapped (Hickson) on the butt. Wilson got Tyson bad, though. So I guess we're even."

Jameer Nelson, who started the season with the Mavericks, finished with 14 points before fouling out late in his debut for the Nuggets.

Nelson was playing Dallas for the second time in two weeks, and with a second different team. The first was with Boston after he was included in the Rondo trade. The Nuggets got him this week in a deal that sent Nate Robinson to the Celtics.

Nelson scored in double figures for the first time since Dec. 9, when he had 18 points against Memphis while still with Dallas.

Nuggets: Home against Minnesota on Saturday.

Mavericks: At Memphis on Monday.