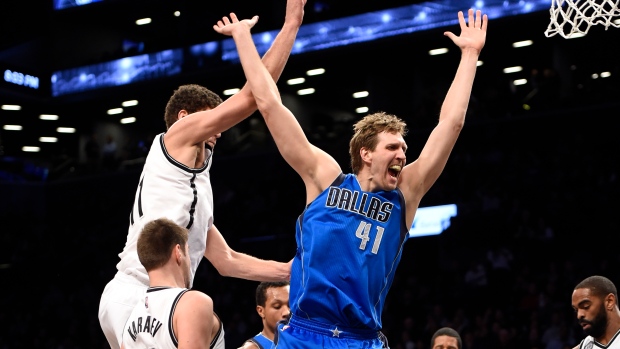 NEW YORK, N.Y. - Dirk Nowitzki called it an "insane, crazy ride" that's carried him past some of basketball's greats.

There have been plenty of games across 17 years like Monday night, when the legs are heavy, the shots a little flat, while playing on the second consecutive night at the end of a road trip.

"I'm proud of it but more proud that we got the win," he said.

Nowitzki made a clinching 3-pointer in overtime that moved him into seventh place on the NBA's career scoring list, and the Dallas Mavericks beat the Brooklyn Nets 96-88 to match their season high with a sixth straight victory.

Monta Ellis scored 19 points and made a pair of jumpers early in overtime before consecutive 3s by Chandler Parsons and Nowitzki made it 96-88 with 34 seconds to play. That gave Nowitzki 15 points for the game and 27,412 in his career, moving him past Moses Malone into the No. 7 spot.

Rajon Rondo shot 1 of 13 for two points but had 14 assists and 10 rebounds for the Mavericks, who have the longest current winning streak in the NBA. Tyson Chandler finished with 14 points and 13 boards.

Brook Lopez had 22 points and 13 rebounds for the Nets but faded after an 18-point first quarter. Jarrett Jack had 20 points and 10 assists.

The Nets were without Deron Williams (sore left side) and Kevin Garnett, who rested on the second night of back-to-back games, and dropped their second straight after winning three in a row.

"They're a very talented ballclub," Jack said. "They hit some tough shots down the stretch, went up double-digits lead in the fourth quarter, but we kept going, kept fighting, kept fighting and gave ourselves an opportunity to win in the end."

Dallas hadn't trailed by more than seven points in any of the first five straight victories, but was down 14 after one in this game. But the Nets managed just 30 points in the second and third quarters after scoring 35 in the first 12 minutes.

"Well, we picked it up," Mavericks coach Rick Carlisle said. "It was like a pillow fight defensively in the first quarter. We just weren't there."

The Mavs ran off the first 10 points of the fourth, taking a 75-65 lead on a 3-pointer by former Nets forward Richard Jefferson. They led by 11 with under 7 minutes remaining in regulation, but then didn't make a field goal after Ellis' basket made it 80-71 with 5:28 left.

Brooklyn battled back to grab an 82-80 lead on Jack's jumper with 26 seconds to play before Ellis tied it with two free throws with 10.5 seconds remaining. Joe Johnson missed a jumper that would have won it in regulation.

Ellis made the first two baskets of OT, Chandler had a follow shot and a pair of free throws, and Parsons and Nowitzki put it away from beyond the arc.

Nowitzki is 10th on the combined NBA-ABA list, where Malone remains seventh. The German forward became the top foreign-born scorer earlier this season.

Mavericks: Dallas is 11-0 on the road against Eastern Conference teams and has won 15 in a row dating to last season. ... Dallas also won six straight from Nov. 11-21. ... Jefferson is third on the Nets in their NBA history in points and minutes played.

Nets: The Nets haven't beaten Dallas four straight times since February 1998 to March 2000. ... The Nets held a moment of silence before the game for former New York Gov. Mario Cuomo and Stuart Scott, the longtime ESPN personality and "SportsCenter" anchor, who both died in recent days.

Lopez went 9 for 12 for his 18 points in the first quarter, then took just nine more shots the rest of the game. He said the Nets "went a different way" afterward behind Jack and Johnson.

"I didn't want to really try to force anything. I did a couple of times, but like I said, Jack got going, Joe got going," Lopez said. "We've got lots of guys that can contribute on this team and definitely don't want to get in the way of that."