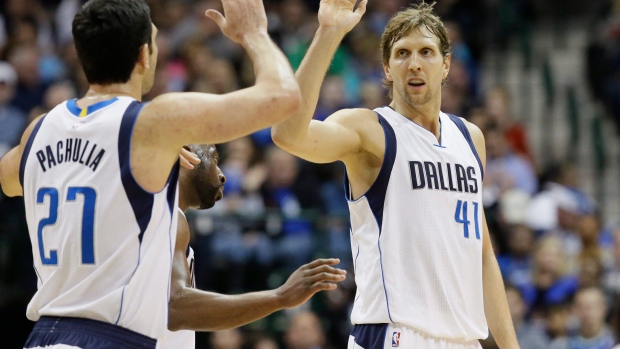 NEW YORK, N.Y. - Dirk Nowitzki has moved ahead of Shaquille O'Neal into sixth place on the NBA's career scoring list.

Nowitzki made a jumper with 9:51 left in the second quarter of Dallas' game in Brooklyn on Wednesday night to pass O'Neal. Nowitzki finished with 22 points, making the go-ahead basket with 19.2 seconds left in overtime in Dallas' 119-118 victory, to push his total to 28,609.

O'Neal had 28,596 in his career and is a candidate for induction into the Naismith Memorial Basketball Hall of Fame in 2016. Wilt Chamberlain is fifth with 31,419 points.

Nowitzki is eighth on the combined NBA-ABA list, behind No. 6 Julius Erving and No. 7 Moses Malone.