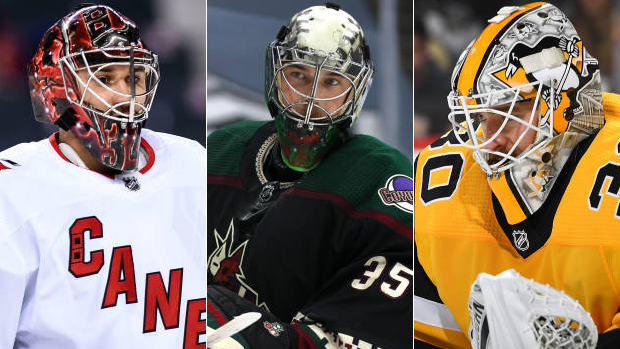 Ahead of the NHL Draft on Tuesday and the opening of free agency on Oct. 9, TSN.ca keeps you up to date with all the latest rumours and speculation from around the NHL beat.

The Edmonton Oilers continue to look for an upgrade in net this fall, with TSN Hockey Insider Pierre LeBrun reporting that they've checked in on at least three goaltenders on the trade market.

"We’ve reported before they spoke to Pittsburgh about Matt Murray. We believe they’ve shown interest in Darcy Kuemper in Arizona. I can also tell you that they’ve shown interest in Petr Mrazek of the Carolina Hurricanes," LeBrun said on Insider Trading. "I think in Mrazek’s case, a goalie that Holland knows well from his days in Detroit, that would be more of a Plan B. If they can’t upgrade in a more serious fashion, perhaps they could circle back to Carolina at some point and end up with Mrazek.

"Keep in mind as well I think the Oilers are keeping a close eye on what’s happening with Jacob Markstrom and his negotiations with the Vancouver Canucks."

Mike Smith, who served as Mikko Koskinen's backup this season, is slated to become an unrestricted free agent on Oct. 9.

Koskinen is signed for two more seasons at a $4.5 million cap hit and has a 15-team no-trade clause in his contract. The 32-year-old had an 18-13-3 record during the regular season with a  .917 save percentage and 2.75 goals-against average.

LeBrun reported earlier this month that the Oilers had checked in with the Pittsburgh Penguins Murray - a pending restricted free agent - but believed the asking price was too high for Edmonton at that time.

According to CapFriendly, the Oilers have $11.3 million in cap space this off-season with 15 players under contract. The team has three pending restricted free agents in Andreas Athanasiou, Matt Benning and Ethan Bear.

Kevin Kurz of The Athletic reports that the San Jose Sharks are one of many teams who have checked in on former Ottawa Senator Bobby Ryan.

Ryan, who won the Masterton Trophy earlier this month, was bought out by the Senators last week and is now an unrestricted free agent.

The Sharks are one of many teams believed to have checked in on free agent Bobby Ryan, I’m told. They could certainly use a right wing.

The 33-year-old had five goals and eight points in 24 games with the Senators this season.

Kurz notes that the Sharks, who have a projected $14.1 million in cap space, could use a right winger.

New York Islanders general manager Lou Lamoriello said Tuesday the team will not be qualifying one or two of their restricted free agents, but it appears Josh Ho-Sang won't be on that list.

Ho-Sang's agent told Arthur Staple of The Athletic that the Islanders informed him earlier in the day that Ho-Sang will be qualified and hold arbitration rights this off-season.

Lamoriello on #Isles RFAs: "I'm sure there will be 1-2 we won't be qualifying. We'll have that done when it's time to submit."

Josh Ho-Sang's agent told me earlier today that the #Isles informed him that they will be qualifying Ho-Sang.

Ho-Sang's agent, Patrick Bedell, clarified earlier this month that despite reports of the winger signing a contract in the KHL, no deal of any kind was in place.

Selected 28th overall in 2014, Ho-Sang did not appear in any games with the Islanders this season. Splitting time in the AHL between the Bridgeport Sound Tigers and the San Antonio Rampage, he had four goals and 13 points in 22 games between the two teams after sitting out the first part of the season as the Islanders looked to work out a trade for him.

The 24-year-old has appeared in 53 career games with the Islanders, posting seven goals and 24 points.