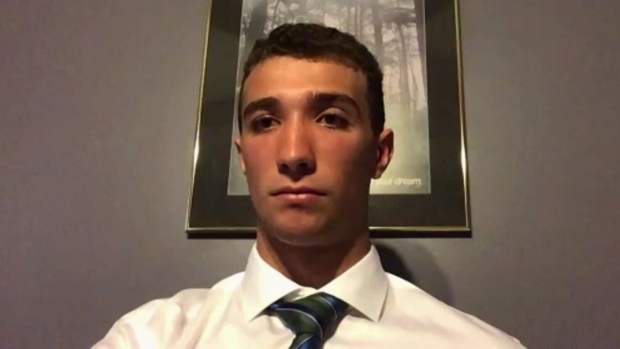 The league announced the move in a release Thursday, saying the punishment relates to an incident that took place while the London Knights defenceman was on loan to SK Lejon in Sweden in November 2020.

Mailloux has previously said he "deeply regrets" taking a photo of himself and a young woman without consent during an "intimate moment'' and then sharing that photo with his teammates "to impress them.''

The act resulted in the 18-year-old being charged and fined under Swedish law.

The OHL says Mailloux can apply for reinstatement to the league on Jan. 1, 2022 and a decision about his reinstatement will be made based on his conduct and what treatment, counselling, mentoring or education he has received.

Days before the draft, Mailloux posted a statement on Twitter asking teams not to pick him this year but the Canadiens defied the request and selected the six-foot-three, 213-pound defenceman 31st overall, with general manager Marc Bergevin defending the move to reporters shortly after the selection.

"We will work closely with him, give him the support that he needs. I know he's been remorseful about the incident, which we truly don't agree with it in all sense of the word,'' Bergevin said. "But he's a young man who made a serious mistake of judgment. And we need to work with him and we did talk to him and he's very aware of that and very remorseful. So that is a big step.''

The pick was widely criticized, with Prime Minister Justin Trudeau saying the Canadiens "showed a lack of judgement." Montreal later announced Mailloux would not participate in rookie camp or the team's main training camp this year.