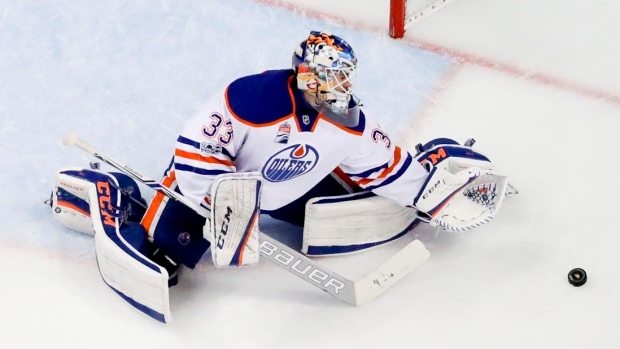 ANAHEIM, Calif. — Grant Fuhr was standing in the hallway near the visiting dressing room at Honda Center wearing a gray Edmonton Oilers hoodie when Wayne Gretzky walked up.

It was the kind of attention Oilers goalie Cam Talbot has earned but hasn't necessarily received during a statement-making season.

Talbot wasn't a finalist for the Vezina Trophy, presented to the best goalie in the NHL, despite setting a franchise record with 42 wins and breaking the mark set by Fuhr in 1987-88. Talbot played in 73 regular-season games, tied with Washington's Braden Holtby in 2014-15 for the busiest workload by a goalie over the last five years.

And now Talbot has helped the Oilers to a 2-0 lead in their second-round series against the Anaheim Ducks, making 39 saves in the 2-1 Game 2 win on Friday night.

"The one wearing the big pads was our hero tonight and had a tremendous game," Oilers head coach Todd McLellan said. "They pushed us hard and they did a lot of good things tonight. While all that's going on, the goaltender stood on his head."

"He was excellent tonight and he's been, like I've been telling everyone all year, he's probably been our best player all year and he made some key saves tonight," Maroon said.

It was a far cry from Talbot's last visit to Orange County during the regular season on March 22. Talbot was pulled midway through the second period against the Ducks after giving up four goals on 18 shots. The following night in Colorado he again allowed four goals, this time on just 15 shots, with his heavy responsibilities seemingly leaving him mentally and physically fatigued with the playoffs just about to begin.

But Talbot has regained his form in the post-season. He posted consecutive shutouts in the first round against San Jose and nearly picked up another versus the Ducks. It took a blistering shot from Jakob Silfverberg on a power play in the second period and a well-placed screen by Patrick Eaves to break the clean sheet.

"He's just the rock back there for us," captain Connor McDavid said. "Even if he has an off night, we can always count on him to bounce back and be terrific and I think that speaks to his character and the kind of guy he is."

The Ducks had other chances, hitting the crossbar or post several times. Antoine Vermette had a shot trickle through Talbot's legs late in the third period only for a Oilers teammate to pull it off the line.

Talbot said those are the breaks that come when everything is going well for a goalie.

"You kind of need some of that luck when you are playing well, and when you're not playing well those pucks just seem to funnel in, so I'll take those anytime I can get them because your luck can turn pretty quick," Talbot said.

And the sound of a shot drawing iron certainly beats the alternative.

"Unless they hear the horn go off, it makes you feel pretty good," Talbot said.

Talbot expects the Ducks to ramp up the pressure in Game 3 in Edmonton. That will likely include more screens and traffic in front of the net, where Talbot will need help to keep his field of vision clear.

"The task doesn't get any easier going home," Talbot said. "They are going to want to come back and steal a couple from us, so we are going to have to ramp up our game a little bit more and come ready to play on Sunday."

Talbot's focus is on finishing off the Ducks. Everything else is like water off a duck's back to the 29-year-old.

"I don't mind flying under the radar," Talbot said. "I don't really like the attention so that's fine by me."

For Fuhr, however, Talbot will certainly make an exception.