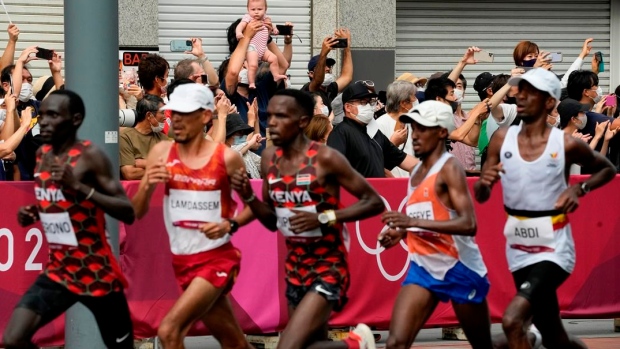 SAPPORO, Japan — One runner after another staggered to a stop and collapsed in the soupy air of Sapporo in Sunday's Olympic men's marathon. Thirty men in the field of 106 didn't finish.

But racing in the finale of a strong Olympic showing by their track and field team, and grateful to run in Canada's colours, the trio of Canadian marathoners never considered stopping.

Ben Preisner was the top Canadian in Sunday's men's marathon, finishing 46th in his Games debut.

The 25-year-old from Milton, Ont., who crossed in two hours 19 minutes 27 seconds, said when the race got tough, he thought about his Canadian teammates — particularly fellow marathoners Trevor Hofbauer and Cam Levins — and of the courageous runs by the Canadian women in their marathon a day earlier.

"They were super inspiring. Malindi (Elmore, who was ninth) and Natasha (Wodak, 13th), absolutely smashed it. And Dayna (Pidhoresky, who finished despite an injury) showed how much determination she had. So, I just knew if Dayna could stick it out there with all that determination, I can do the same. And I owe it to the country and my competitors to just give it my all."

Hofbauer, from Calgary, finished two spots back in 2:19.57. Canadian record-holder Levins, of Black Creek, B.C., hung with the lead group through the first half of the race, but faded over the final 10 kilometres to finish 72nd in 2:28.43.

"I really wanted to finish out of respect for a guy like Tristan Woodfine (who qualified but wasn't selected for the team)," said Levins. "I felt like it was only right to finish this race, and only three of us got to go. And so, yeah, I think that's kind of what motivated me to stay in.

"It's hard to call yourself an Olympic athlete if you can’t even finish the race . . . so, wanting to do my best to get through it no matter how slow or tough the second half was."

Marathon legend Eliud Kipchoge of Kenya, the defending champion and world record-holder, pulled away over the final 10 kilometres to win gold in 2:08.38. Abdi Nageeye of the Netherlands finished 80 seconds back, while Bashir Abdi of Belgium claimed the bronze.

Down the homestretch, the 36-year-old Kipchoge held up two fingers for his back-to-back titles.

"King," one of his fellow racers said as he walked by.

The marathons and race walk events were moved 800 kilometres north to Sapporo to avoid the smothering heat and humidity of Tokyo. But the weather still proved costly, evident in the runners who didn't make it to Sunday's finish line in 29 C heat. The humidity was 81 per cent.

"It's kind of deceiving. There was a lot of cloud cover for the race, so it seemed like it was going to be a bit cooler," Levins said. "But still, the humidity didn't care about cloud cover or sun . . . you dried out really quickly from any water and ice that you put on yourself."

Times were predictably slow in a tactical race of survival. Levins' Canadian record, by comparison, is 2:09.25. The qualifying standard was 2:11.30.

As he started to fade, Levins said his legs were "charley-horsing all over."

"I think my first half was 65 (minutes), and 83 in the second half," he added. "It was a really, really tough second half. I was just trying not to hurt myself basically, as I finished. But I went after it. And I certainly don't regret trying."

Hofbauer, who clinched his Tokyo berth back at the Scotiabank Toronto Waterfront Marathon in October of 2019, said he'll use Tokyo as motivation.

"It adds some fuel to the fire," he said. "We’ve got three years to Paris (2024 Olympics) to make some noise, get back to work, and we'll be back in three years, ready to go. We'll be stronger than we are now."

All three acknowledged the depth of Canadian marathoners, and making national teams for major events such as next summer's world championships in Eugene, Ore., or the Commonwealth Games in Birmingham, England, will be no easy feat.

Five Canadian women and four men qualified for the Tokyo Olympics, but only three spots were available for each.

While no fans were permitted at events in Tokyo due to the state of emergency amid rising COVID-19 cases, Japanese spectators lined the marathon course in Sapporo, ringing bells and waving flags.

"The fans on the course never stopped clapping, every single person that I ran by clapped for me, and that just goes to show how respectful they are," Preisner said. "There's obviously a lot of risk having all these athletes come in from around the world into their country, but they're still out there cheering us on and it really meant a lot.

"I even threw down one of my Canada hats right near one of the kids, and she just went wild. That experience is something that I'll definitely remember, just how excited they were. And if there was anything we could bring, any sort of positive experience to them as well, I hope we were able to."

— By Lori Ewing in Tokyo.

This report by The Canadian Press was first published Aug. 8, 2021.