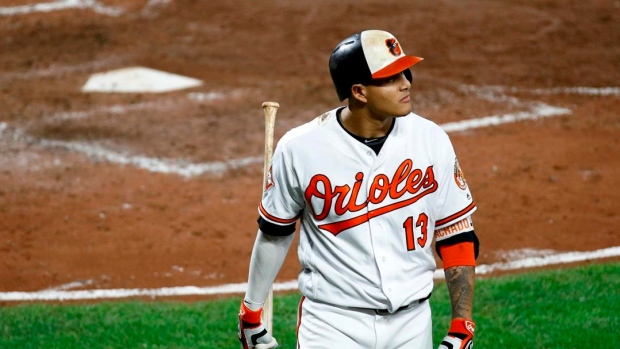 The Los Angeles Dodgers have won the Manny Machado sweepstakes, getting the prized All-Star shortstop from the Baltimore Orioles in a trade Wednesday night.

Machado is expected to be introduced in Milwaukee on Friday before the Dodgers open a series against the Brewers.

Machado's contract expires at the end of the season, and the last-place Orioles decided against negotiating an expensive, multi-year extension because they have too many holes as the team moves into a rebuilding mode.

Though only a summer rental, Machado was coveted by a variety of contenders, including Philadelphia, Milwaukee, the Chicago Cubs and Arizona, currently a half-game behind the first-place Dodgers in the NL West.

Los Angeles gets a four-time AL All-Star with two Gold Gloves who has 129 homers over the last 3 1/2 seasons. Machado was drafted third overall by the Orioles in 2010, made his big league debut in 2012 and spent his entire major league career in Baltimore.

The Dodgers are filling a gaping hole at shortstop created by the loss of Corey Seager, who underwent Tommy John surgery in May.

And Machado moves from a cellar-dweller to a division-leading club in the middle of a pennant race. Not only that, but Machado likely gets to stay at shortstop, the position he manned this year after previously playing third base for Baltimore.

"I love playing short. I mean, I love it," Machado said last week. "I'm more excited playing shortstop than I've ever been. I'm more into the game. This is where I've always wanted to be, this is what brings the best player out of me."

Chris Taylor has been playing shortstop for the Dodgers, but his numbers are down from last season.

With Machado at short, the Dodgers could move Taylor to second instead of Logan Forsythe, offensive sensation Max Muncy to first, last year's Rookie of the Year Cody Bellinger to centre and still have Enrique Hernandez available to play numerous infield and outfield positions.

The Dodgers still need to bolster their bullpen, which has been hit by a number of injuries.

The top acquisition for the Orioles in the deal is Diaz, a 21-year-old outfielder in Double-A. Diaz hit two home runs in the All-Star Futures Game last weekend. He's hitting .314 with a .905 OPS with six homers, 30 RBIs and 36 runs scored this season.

At 28-69, the Orioles approach the July 31 non-waiver trade deadline in full selling mode for the first time in seven years. Machado might not be the only one leaving, either. Three other solid players in the final year of their contracts —outfielder Adam Jones, lefty Zach Britton and right-hander Brad Brach— could also be headed out of town.