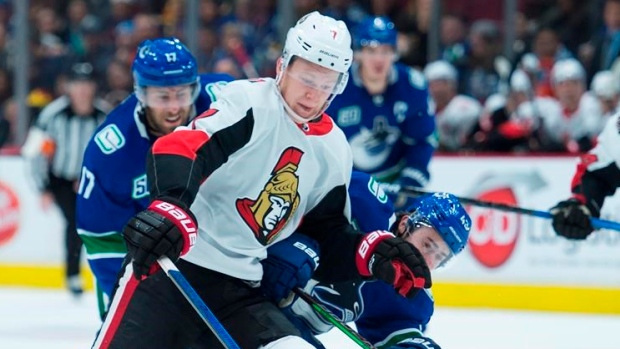 Tkachuk was fined US$2,486.56, the maximum amount allowed under the league's collective bargaining agreement.

The NHL's department of player safety made the announcement Saturday night, hours after Philadelphia beat Ottawa 4-3.

The incident took place during the final 30 seconds of the game. The 21-year-old Tkachuk sent Laughton down with a cross-check before jumping him. Tkachuk was assessed two minor penalties on the play, one for cross-checking and the other for roughing.

Laughton had shared some words with the Senators' bench moments after he scored the eventual winner at 4:49 in the third period.

After the game, although Tkachuk wouldn't reveal exactly what was said, he expressed his displeasure with Laughton.

"Definitely I wasn't happy," Tkachuk said. "He said something towards the bench. It happens. Yeah, I'll leave it at that."