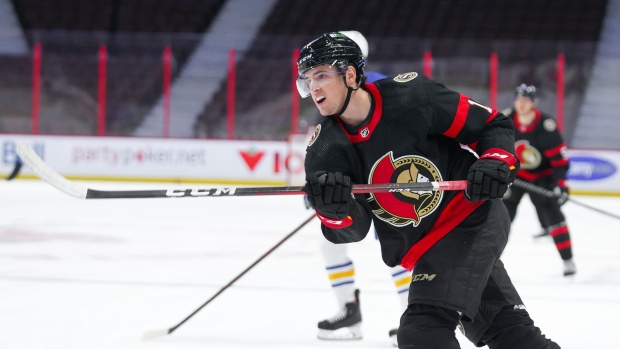 Ottawa Senators leading-scoring Drake Batherson will miss at least the next two months with a high ankle sprain after taking a hit from Buffalo Sabres goalie Aaron Dell on Tuesday.

Drake Batherson will be “out a couple of months” with a high ankle sprain according to #Sens coach DJ Smith.

After the Sabres game though, the forward didn’t make it about himself, the first thing Batherson said was “what a hat trick from Ennis.”

Dell appeared to shove Batherson with his right shoulder as he was attempting to skate behind the net. Batherson went feet-first into the boards and needed help to leave the game.

Dell was suspended three games for interference on Wednesday.

Batherson, a 23-year-old right winger, is having a career season with 13 goals and 21 assists over 31 games with the Sens in 2021-22, his fourth year with the franchise.