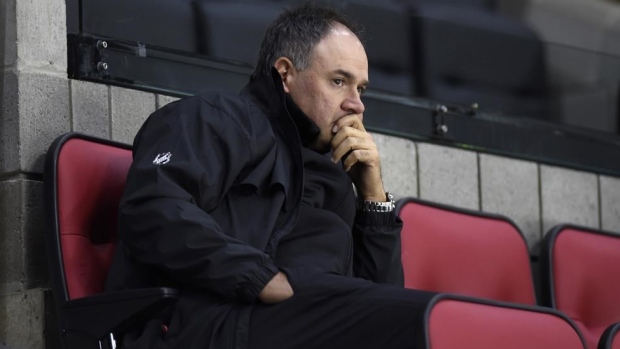 When organizations decide to enter a rebuild, they generally accept a two-phased approach.

The first half tends to focus on tearing down an ultimately flawed roster – one that may not be as competitive on the ice as intended, or one that may have been fiscally mismanaged against the hard cap. The second half focuses on the introduction of younger (and generally cheaper) players whose developmental arc is still favourable.

The passing of the 2019-20 NHL trade deadline was a critical transition point for the Ottawa Senators on this front. For a couple of years now, Ottawa has been tearing apart a lineup that was once a single goal away from reaching the Stanley Cup Final. The exodus of names like Erik Karlsson, Mike Hoffman, Mark Stone, and, most recently, Jean-Gabriel Pageau – moved to the New York Islanders for three draft picks on Monday – put the final nail in the coffin of that memorable 2016-17 lineup.

But if you are going to commit to a full-blown rebuild, you have to commit all of the way. There is a cost with that sort of strategy. As one example: The loss of Stone, a born-and-bred Senator who clearly soured on the organization’s long-term strategy, will be felt for a considerable length of time.

Players like Stone became collateral damage in Ottawa’s broader strategy to transition to a full-blown youth movement. I mean, just look at what has happened to their roster from just a few seasons ago: 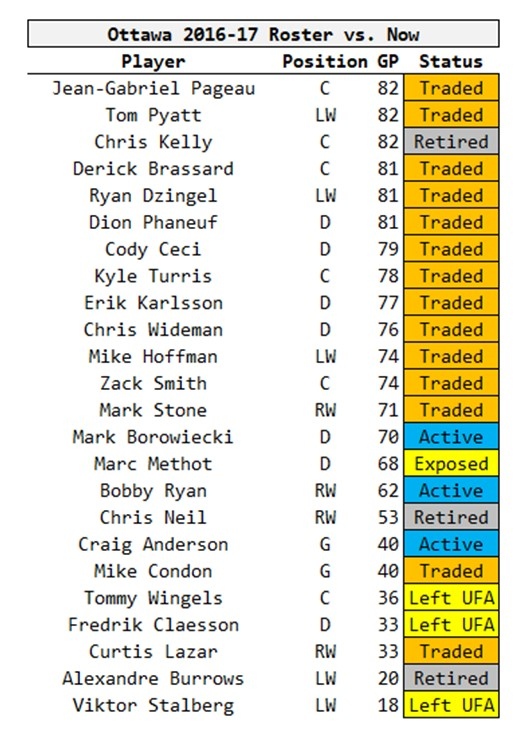 Nearly 60 per cent of a team from three years ago was traded in the matter of two years and change. As insane as that sounds, the other side of the coin might be crazier: only three players from that lineup remain on the active roster. And consider those players. Mark Borowiecki, who has developed into a solid depth defender, and goalie Craig Anderson both have expiring contracts at the end of the season. Veteran winger Bobby Ryan just returned to the ice.

Having gutted their roster, Ottawa’s attention has turned to the draft and development side of the rebuild.

There are heaps of young and capable prospects Ottawa has either introduced to the lineup or will at some point in time. Young players like Thomas Chabot and Brady Tkachuk have already solidified their respective roles as young leaders at the NHL level, and their impressive developmental affiliate in Belleville has four forward prospects in Josh Norris, Alex Formenton, Drake Batherson, and Rudolfs Balcers all scoring at above a point-per-game pace. And help is still coming in waves. This summer, Ottawa will have 13 picks to use at the draft, including three (via San Jose, New York Islanders) in the first round.

Ottawa’s volume bet – grab as many meaningful pieces as the team can, and let player development sort out who invariably becomes part of the organization long term – is a good one. But it doesn’t come without risk. One of the challenges Ottawa is going to have in the shorter term is filling out the active roster in a way that (a) is cap compliant; and (b) shows an ability to progress in the standings. The team hasn’t played meaningful hockey in quite some time, and heading into this summer, they are going to have to spend a significant amount of money, regardless of their organizational direction.

Looking at this summer, the Senators have nine rostered players with contracts in 2020-21 – $18-million in forwards, $14-million in defencemen, $700,000 in goalies, and $7 million in injured reserve money. Even with the injured reserve bump, they will be at least $21-million under the expected 2020-21 cap floor – and that number may be higher depending on how much the cap ultimately grows.

Most of the roster spots the team would like to fill out next year are from players on entry-level contracts, and with Chabot extended, there isn’t another obvious name to throw an extension at.

To that end, Ottawa is in a situation that is unparalleled around the league: 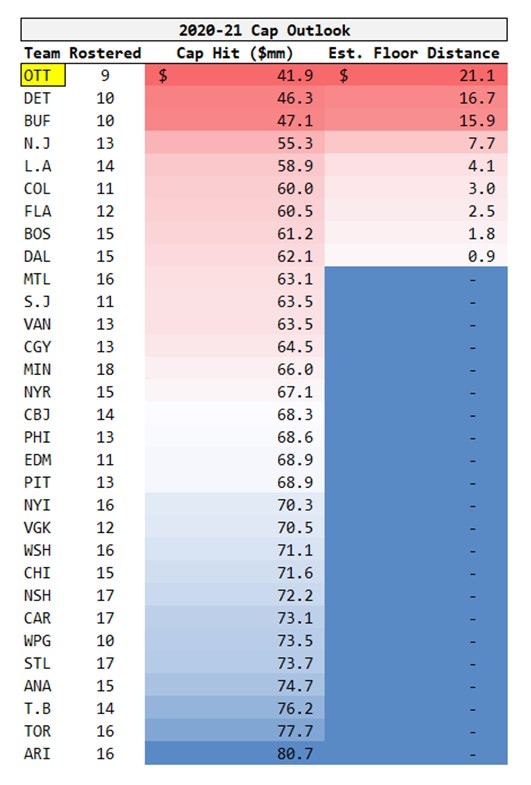 Ottawa will have to be a player on the trade market, be active in unrestricted free agency or go hunting for long-term injured reserve options (or use a combination of all three) because there is simply too large a gap to cover through internal salary alone.

The good news is that there are a number of impact players reaching contract expiry at the end of the 2019-20 season. The biggest challenge will be convincing a broad group of talented players that there is a chance to win sometime soon in Ottawa.