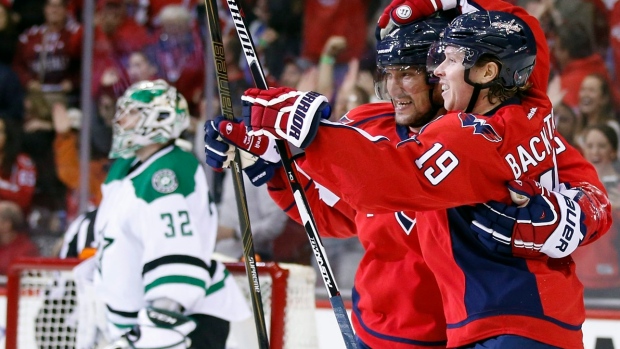 WASHINGTON - A record-breaking night for Alex Ovechkin ended in disappointment for the sharp-shooting star and his Washington Capitals.

Ovechkin scored his 484th NHL goal, breaking Sergei Fedorov's mark for most by a Russian-born player, but the Dallas Stars bounced back to beat the Capitals 3-2 Thursday.

Ovechkin's goal came at 7:01 of the third period, knotting the score at 2. He converted a backhand pass from Nicklas Backstrom, shoving the puck into the left side of the net.

The sellout crowd stood and cheered, many of them chanting "Ovie! Ovie!" to celebrate the milestone. A video montage followed, concluding with Fedorov offering congratulations to the new Russian scoring champion.

"I think he wishes that we won the game, but obviously it's a huge accomplishment," Backstrom said. "I'm really happy for him."

Ovechkin had gone four games without a goal and missed several chances in this one before connecting.

"Sooner or later I knew it was going to come," he said.

So did his teammates, but that didn't lessen their enthusiasm.

"You'll see me jump 4 feet," coach Barry Trotz said. "Actually about 4 inches. It was pretty exciting for everybody because they knew that was a little bit of history."

"It's pretty crazy. When you take a step back and think about it, he's scored more goals than any Russian hockey player ever, and he's only 30 years old," Capitals defenceman Taylor Chorney said. "You know he's going to score a ton more goals and he's going to run away with that record."

Although Fedorov played most of his games with Detroit, he passed the previous record holder, Alexander Mogilny, with his 474th goal in Washington's 6-5 win over Dallas on Oct. 25, 2008 — the last time the Capitals beat the Stars.

In this one, Jason Spezza spoiled Ovechkin's big night at 11:10 of the third period, converting a turnover by Jason Chimera into the go-ahead goal.

Dallas has won eight straight against the Capitals, including five in a row in Washington. Kari Lehtonen stopped 33 shots for the Stars, improving to 9-1 this season.

"We sent our most physical forward after him and he mowed him over," Ruff said. "A lot of admiration for the way he plays. He plays the game hard. There's probably only one guy that can score some of the goals that he scored. He's got probably the best shot from that off side. I don't think anybody has scored as many goals as he has from over there. And he can be dynamic on the rush, too. He's the total package. I'm glad we only play him one more time this year."

The victory boosted the Stars' point total to 32, best in the Western Conference.

Dallas went up 1-0 at 9:28 of the first period when Tyler Seguin scored as Patrick Sharp provided a full-body screen of Philipp Grubauer. The Capitals challenged the play, calling for goalie interference, but the goal stood.

That cost Washington its lone timeout.

Backstrom tied it late in the period with a shot that ricocheted off Dallas defenceman Jordie Benn and into the corner of the net.

The Stars outshot Washington 11-8 in a scoreless second period.

Cody Eakin put Dallas ahead 2-1 at 4:45 of the third period, deflecting a shot by John Klingberg past Grubauer.

NOTES: Washington has given up the first goal in nine games. ... Dallas D Alex Goligoski played in his 500th NHL game. ... Brooks Laich played in his 700th career game with Washington, teammate Matt Niskanen played in his 100th and Trotz coached his 100th game for the Capitals.