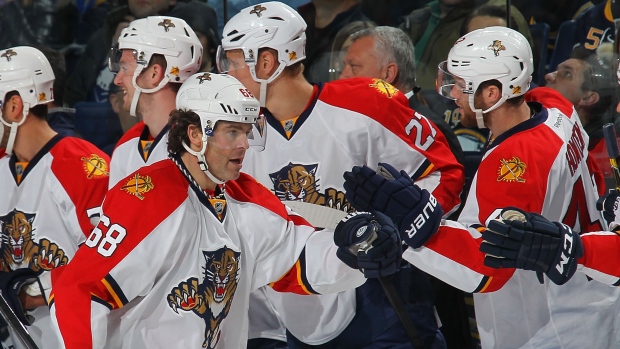 Jaromir Jagr is returning to the Florida Panthers.

The team announced on Thursday that they have signed the 44-year-old to a one-year deal.

Jagr has been with the Panthers the past year and a half after the team acquired him at the Trade Deadline two seasons ago.

“Jaromir is a Hall of Fame player and had an excellent season playing alongside Aleksander Barkov and Jonathan Huberdeau,” Panthers GM Dale Tallon said. “His track record speaks for itself, ranking third all-time in points and goals. He has been a great fit with our organization and we are excited to have him back for next season.”

“Jaromir has had a tremendous influence on our younger players and has been a key offensive contributor on our team,” Panthers head coach Gerard Gallant said. “We are happy to have him back as we look to build off this year’s playoff appearance.”